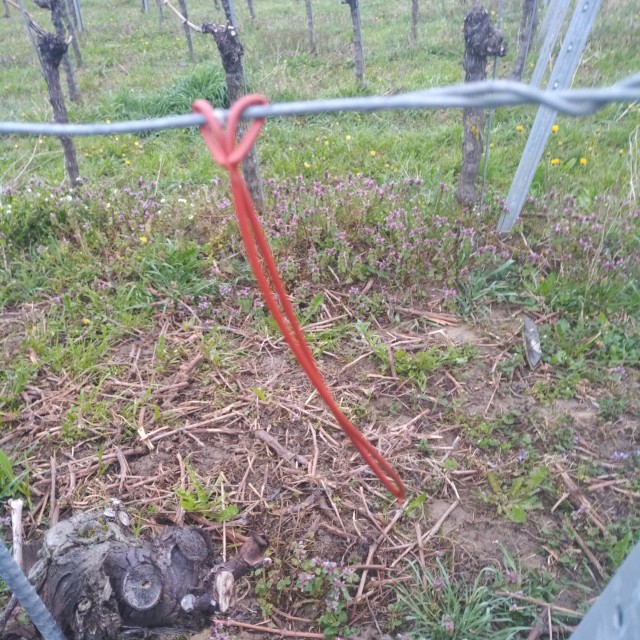 You thought you knew all about the birds and the bees, but what about the moths? That probably wasn’t even on the curriculum!

You never know what you will learn when you are out for a walk. My wife pointed out this red wire to me yesterday as we took an early morning walk through the vineyards outside Sulzburg. On one of her solo walks she had seen people installing them, and had stopped to ask about it.

Apparently it is, for lack of a better word, a birth control device. I’m not sure exactly how it works, and I won’t rule out the farmer working in the vineyard was pulling her leg, but here’s the story she told me.

The red wires prevent the moths from breeding. How she wasn’t told. You need to have about 500 of them for every hectare of land for them to be effective.

If you are like me, you are brimming with questions right now, the first one being “how does it work?” It doesn’t make sense to me. (My next question would be, does it affect butterflies too? You want butterflies, even if you don’t want moths.)

I thought about leaving the questions unanswered, asking you to do the research for me. But you know what they say, “if you want something done well, do it yourself.”

Just kidding about that. I did the research because I didn’t want to wait for you to provide the answer. Sometimes you want to know something immediately.

Turns out I didn’t look closely at the “wires” in the vineyard. Apparently they are dispensers of sorts, releasing female moth pheromones. Because of that, the male moth can sense the female’s presence, but can’t find her. Given the short life span of your average moth, their union is therefore never consummated due to this sexual confusion and no eggs are laid in the vineyards, which means no larvae to damage the vines by eating the grapes. I guess butterflies are smart enough to not be attracted by the pheromones.  (You can read this article if you want to know where I got my information.)

This method eliminates the need for fertilizers to control the moths, which makes it more environmentally friendly. Though I wonder where they get the pheromones from – my bet would be they are artificial.

I am a little surprised though that this procedure hasn’t drawn the ire of some moth rights activists. Seems a pretty cruel trick to play on the poor insects. ‘

Somehow though, I doubt the farmers care. And neither do the wine drinkers.