Coming from a North American city and settling in rural Germany, you know some things are going to be different. One of those things cropped up yesterday.

We were taking the bus between Sulzburg and Mullheim. Depending on the time of day, the bus takes either 20 or 40 minutes to make the trip. It is the same bus number (I don’t know why) but it takes two entirely different routes to get to its destination. 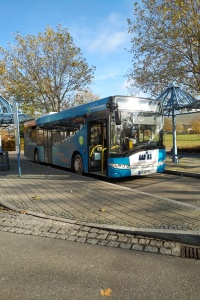 I usually wind up on the longer route, not because I prefer it but because that always seems to be the next bus. Given the rarity of local bus service, better to take an extra 20 minutes on the journey than to wait another hour to save 20 minutes of transit time.

Yesterday though we were taking the shorter route, which I am not sure I have taken in that direction before, though I have used it on the return trip from Mullheim. In the little town of Britzingen the driver pulled up to the bus stop, and as people boarded he turned off the engine. We just sat there for several minutes, waiting.

My wife speculated that the bus was running ahead of schedule and this was a time point. When he saw a bus coming from the other direction, the driver started the vehicle and off we went. At that point I figured it out.

Sure enough, a couple minutes later, as we went through Dattingen (not to be confused with the nearby town of Dottingen), I noticed just how narrow the streets were. I doubt two cars can pass there, but with some backing up I’m sure passage can somehow be negotiated. Then again, there isn’t much traffic – maybe cars meet only a few times a year. But there is no way the two buses could pass, and even backing up would be a major challenge given the road design.

All of which left me wondering if some bright person, knowing the size of the bus and the width of the roads, built that rest stop into the schedule from the outset of the service. Or, as I think more likely, did they find out the hard way with buses immobilized while the drivers tried to figure their way out of their predicament.

I’ll probably never know. But it was a reminder just how challenging driving in this area can be.

← What I Wanted To Say Was…
The Slow Boat Arrives →