One of the things I like about being a blogger is the opportunities it presents to learn something new. As evidenced by the subject of today’s post.

I expect to learn something new when I travel. That’s part of the reason for going some place you haven’t been before. With a love of history and culture, I am sure to find something interesting wherever I go. 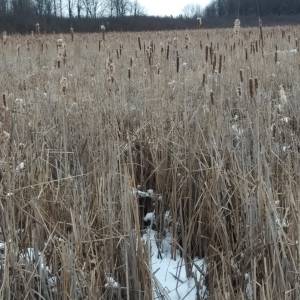 It is always nice though when you learn something new about your local area. Though in this cased I guess I already knew what I was seeing, but didn’t know the details until I looked it up to make sure what I was telling you was accurate.

As the new year began my wife, daughter and I went for a walk in Mer Bleue, a place I have written about several times here. It is a favorite part of Ottawa’s urban forest and you can walk there year-round. There are trails through the woods and a boardwalk that takes you through the peat bog, which is a short, easy walk popular with families and older citizens.

I dropped my wife and daughter off to hike one of the forest trails, while I drove the car to the next parking lot. The idea was I would meet them in the middle and walk back with them. If I had parked at the starting point and joined them on the walk we would have had a seven-kilometre round trip, possibly ending after dark. It gets colder in the forest after dark.

Before I headed down the forest trail though, I decided to take in the boardwalk on my own, maybe snap a picture or two. I’ve walked it a lot in the spring, summer and fall, but not as often in the winter. Each season brings with it a different beauty.

This time I was struck by the look of cattails in the snow. I snapped a few pictures to share with you.

I wanted to double-check the spelling of cattail, and it was then I discovered that the proper name of the plant is typha, and that there are more than 30 species of it.  The Americans call them “wild corn dog” – which makes sense if you have ever eaten a corn dog. They do look similar before they go to seed.

In the UK and Australia (and some parts of Canada) they call them bulrushes. That has me thinking of Moses who was left on the banks of the Nile by his family in a basket made of bulrushes. I wonder if it was the same type of bulrush.

On a cloudy winter’s day, with few people around Mer Bleue, there was a quiet beauty in these plants, whether you call them catttails, bulrushes, wild corn dogs or typha. 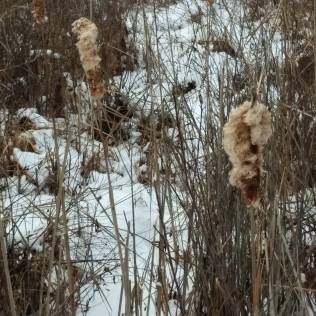