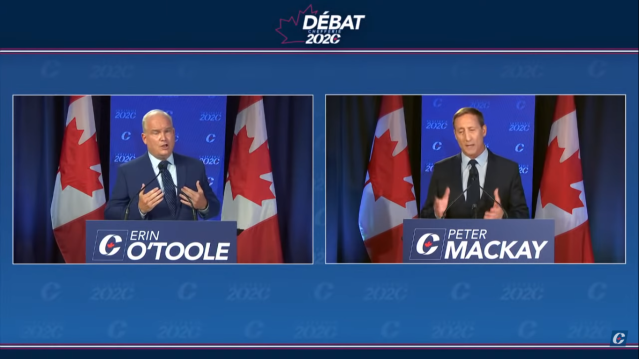 The four contenders for the leadership of Canada’s Conservative party square off in an English-language debate tonight, as they did in French last night. Why should you care?

If you are a Canadian you should be interested; one of these four will be the next leader of the Official Opposition, and possibly Prime Minister after the next election. If you aren’t a Canadian, it should still be interesting to watch how the political process unfolds in one of the world’s more stable democracies.

For the past few months the candidates have been unable to campaign as they would like, hampered  by travel and meeting restrictions. Pressing the flesh, normally a mainstay of any political campaign, is frowned upon. Travel to meet party members hasn’t been allowed.

I’ve been relatively quiet on the topic as the campaign has unfolded. Not that I am not interested in the outcome, but like the rest of the world I’ve been focusing on other issues. I figured there would be time to express my opinion before the vote.

And I’m not as invested in the race this time around. In 2015 I had met, if I remember correctly, eight of the 14 candidates vying for the Conservative leadership. This time around I only know one of the four, as others I had met didn’t make it to the final round.

I’ve offered advice to all four candidates privately. I may write about the response at some point in the future. Sometimes my objective (and I hope constructive) criticism doesn’t seem to be resonating with some of the campaigns.

Candidates running for office have to be able to juggle the demands of the party faithful, many of whom are ideologically driven, with the necessity of appealing to a broader spectrum to get elected. Which is why the current Prime Minister, who has touted his “green’ credentials, bought an oil pipeline. Politics is frequently the art of the compromise, not the art of the deal. Someone who wants the top job needs to listen to the concerns of all Canadians, not just party members.

So what to watch for tonight? Look for candidates with ideas, who sound Prime Ministerial. In all probability all of them will attack the Prime Minister and his policies, but won’t attack each other that much.

I’m extremely curious to see how the two relative newcomers do against a career politician and an long-time MP. Three months ago the experts were calling this a coronation, with one candidate considered a lock to win. I don’t think that is the case anymore.

The debate starts at 7 p.m. EDT, which is 1 a.m. my time, so I probably won’t be watching live. First thing in the morning though.

If you are in a more convenient time zone, you can catch all the action at the link below.  Let me know what you think – I suspect it is going to be more interesting than many people would expect.

Remember, if you watch now and pick the person you like best, you have bragging rights when they become Prime Minister. Let me know who you would vote for!

← Are You Still Here?
Envying The Children →