The mines are still there on the edge of town if you want to try your luck. There are probably rules, but no fences to keep you out. There’s silver in there somewhere.

Mind you, there can’t be much of it or someone would still be working the mines. I haven’t gone exploring. The entrance to one (on the way to the town swimming pool) is open, but is only about a metre tall. I bent over and decided against it. 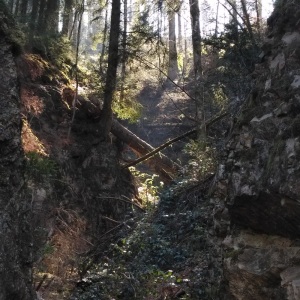 Recently though I discovered another mine, more of an open pit affair, across the stream from the one I knew about. I’d walked by dozens of times without realizing what it was. I hadn’t noticed the sign giving the history.

I knew Sulzburg was at one point a mining town. I keep meaning to check out the museum to learn more.

I hadn’t realized though that the first people to mine here were Romans. That makes it more than 1,500 years ago, at a minimum. Maybe a couple of thousand. In North America we don’t usually think in those terms – we see a hundred years as a long time.

I didn’t explore the open pit mine, which goes back about 300 metres from the trail. There are trees to climb over, a lot of debris, and I felt it is a task left for a day when I wasn’t wearing shorts. 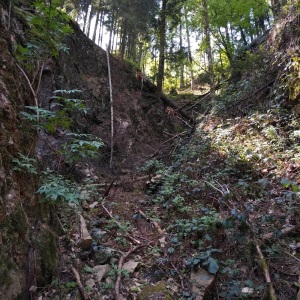 It certainly doesn’t look like my concept of a mine, and I have no idea when it was abandoned, but they were taking quartz and silver out of here as recently as 1720, if Google Translate interpreted the sign accurately.  Certainly there’s a lot of overgrowth.

I noticed something sparkling in the sun, and picked up a rock where you can definitely see quartz embedded. Maybe there’s some silver in there too – though I don’t know what that looks like in the wild.

Somehow I don’t think anyone is going to get rich mining in this area. Then again, there have been improvements in mining techniques in the past 300 years. Maybe there is a way to make Sulzburg’s mines viable again.

If this were Canada I know (more or less) how to stake a mining claim. I wonder how it is done here? 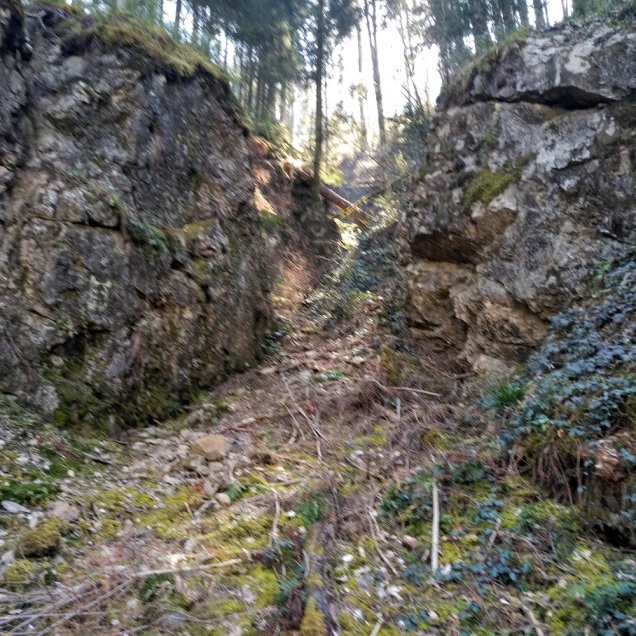