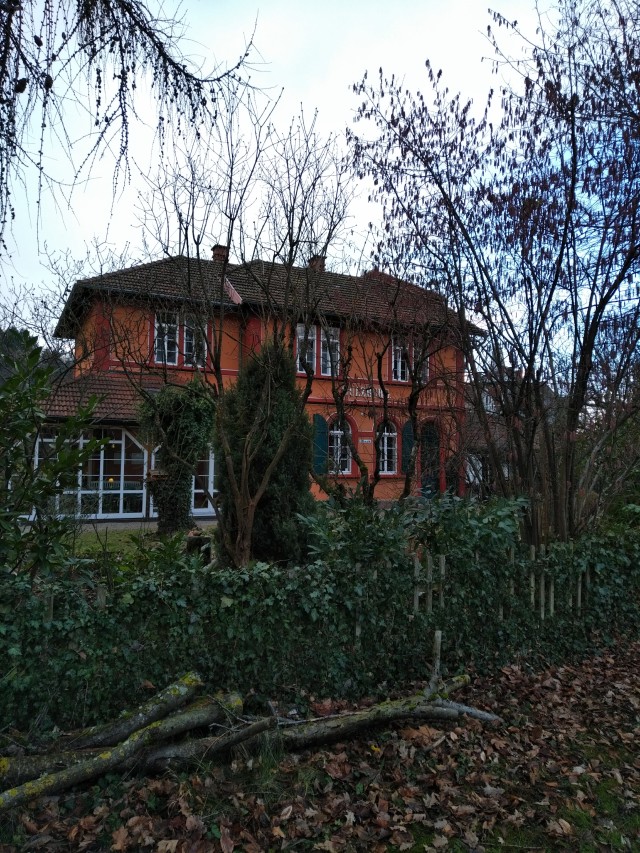 Sometimes I get easily confused – but it isn’t always my fault. In those cases I blame the system.

Figuring out a new transit system is a challenge, wherever you are living. If you don’t speak the language that’s an additional challenge. If the language is loaded against you, what are you supposed to do?

When I visited Germany for the first time, in 1986, one of the first words I learned was “Bahnhof,” which is the German for train station. It’s an important word to know as so much short commuter travel is by train, unlike in Canada where trains are used for longer trips. 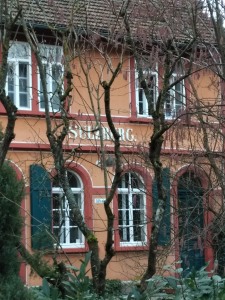 Those arriving by train would have seen the town name on the train station. The owners of what is now a private residence have kept the sign.

Many of the villages here have train stations, and people routinely travel to another town for work or school or shopping for the same price as a bus ticket. Sometimes you are on the train for no more than a couple of minutes – the villages are that close together.

In Canada the train system has shrunk in the past decades. When I was eleven I took my first unaccompanied train ride, from Montreal to Arnprior, Ontario. It was about a three-hour trip, and I remember standing last last hour, once we left Ottawa, because I didn’t want to miss my station. You can’t do that today – there have been no passenger trains stopping in Arnprior for more than 40 years.

I think the German system has shrunk too, but there are still relics of the past. That’s where the confusion comes in, especially if you are using modern technology to plan your trip.

It is possible to travel from the “Bahnhof” in Sulzburg to wherever you like and never see a train. I don’t know when they tore up the tracks. Sometime shortly after the Second World War, maybe in the 1960s. The station is still there (a private residence now) and the stop is still part of the transit system, though now it is only a only bus stop.

The sign says “Bahnhof” or “train station.” There have been no trains in Sulzburg for 50 years, maybe longer.

You can see my confusion. I have taken the bus to and from the “Bahnhof” stop in Sulzburg, but the ones in Heitersheim and Mullheim, are used by both buses and trains. How am I suppose to know the difference?

I guess it doesn’t matter – as long as you already know where you are going and how you are going to get there. Must be confusing for the tourists though, waiting for a train that never comes.

But then again, given that buses are infrequent, maybe in this area tourists don’t use public transit. That way they avoid any problems.

Which leaves me as the only one confused.

← More From The Weinberg
Wolf’s Canyon →