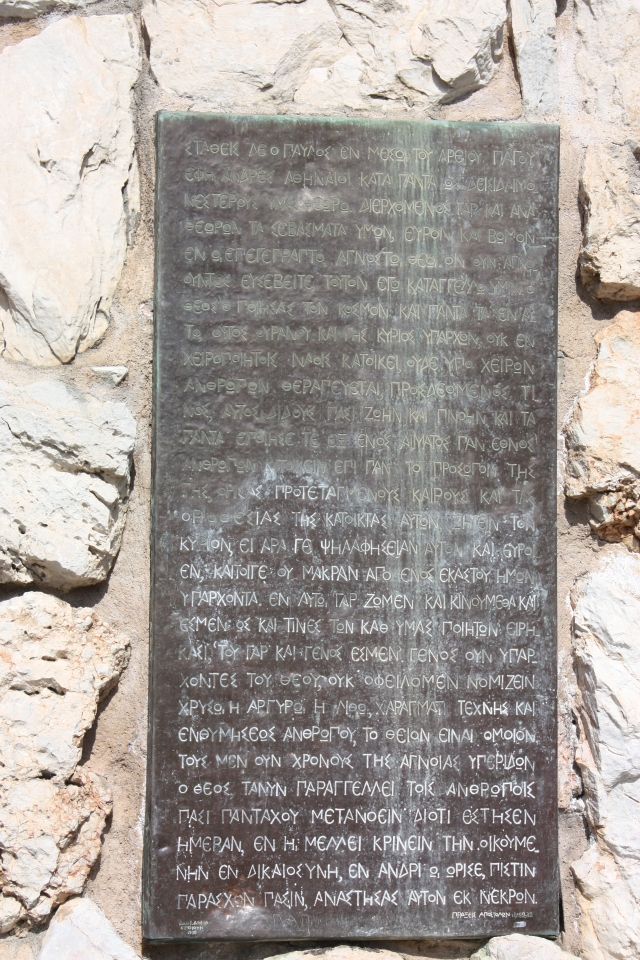 It is just a hunk of rock, not what I was expecting. But what an historical piece of rock.

I had expected to see ruined buildings, but it turns out there never were any on Mars Hill. The topography doesn’t allow it – too uneven, I guess. In ancient Athens it was a meeting place, where people would come to debate the issues of the day. The Supreme Court sat here. The weather is such that they must not have needed a building.

It was on this hill, in about 60 A.D. that a rabbi from Tarsus, in Palestine, gave one of the most remembered speeches in history. You can find the full text here.

Athens was the home of philosophy and wisdom. This was where people came to learn. It was Oxford and Harvard and the Sorbonne all rolled into one location.

Athenians were knowledge hungry. They also were good at hedging their bets. That is why they had an altar with the inscription; ‘to the unknown God.’ 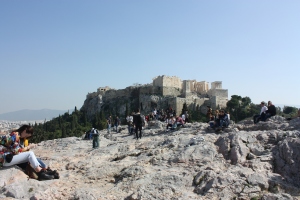 Maybe Zeus and Athena hadn’t delivered in the way they would have hoped. Maybe they just wanted to make sure they didn’t offend anyone. Maybe they were just religiously confused.

On that day recorded in the Bible, in Acts 17, Paul of Tarsus offered them the chance to end their confusion. Unsurprisingly, it turned out not too many were interested in Truth. The people of the centre of learning had less than open minds.

It doesn’t seem much different today when you think of it. Religious belief comes in many shapes and sizes. Even those who claim no religion live with several religious assumptions – they just don’t realize it.

Standing on Mars Hill I thought about people and religion and our quest for truth. The Athenians, with a myriad of gods, were able to pick and choose their beliefs. That allowed them to do what they liked, while giving lip-service to having a belief system. Like people today, they believed in themselves.

Anyone who is willing to look clearly and honestly at humanity knows that we fail when we set ourselves up as gods. That was just a part of the message Paul brought to Mars Hill.

Paul brought a message of Truth to the scholars, philosophers and leaders gathered on Mars Hill. They really didn’t want to hear it.

It wasn’t that they couldn’t understand that Jesus had actually risen from the dead. They were probably more open to that idea than most people today.

But, like most of us, they realized that the resurrection was a game changer. They were comfortable with their lives. The idea of the risen Christ, the changes they could see that would come with following Him, were more than they wanted to handle.

They chose comfort over Truth. Which would you choose?

← The Acropolis – II – Visions of Athens
Random Thoughts From Paul →