My wife said she’s heard there was a ruined castle worth seeing near Emmendingen, about 45 minutes away by train. It was a sunny Sunday afternoon, and we be walking anyway. Why not walk in Emmendingen?

It seems sometimes there is a ruined castle on every hill in Germany. The hill just outside Sulzburg, Castellberg, has some ruins at the top, but they seem to me to be more cottage than castle. 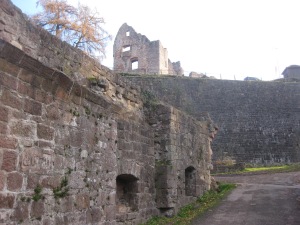 When we arrived in Emmendingen here was a bus at the train station, heading in the right direction, so we hooped on. Five kilometres uphill didn’t seem that appealing somehow, and we figured we could walk back. We told the driver we were interested in walking at least part of the way; he dropped us about 1.5 km. from the castle.

I’ve been to the two castles in easy walking distance of Sulzburg, in Staufen and Badenweiler.  Those are nice. The Hockberg outside Emmendingen is in a different category. You could probably put the other two inside it and still have lots of room to move around.

The free museum attached is closed between November 1 and March 31, so proper history will have to wait for my next visit. And there will be a next visit. Not having checked the website, other than to note there is one, I really can’t give you a rundown of the place and its importance in history. The pictures say a lot on their own.

I do know from the signs that the castle dates from the 11th century, more or less and was destroyed and rebuilt a couple of times before being finally left in ruins in the 17th century. It was a military centre, with hundreds of troops quartered there.

It is an impressive ruin, and close enough to home that I think it will become one of those “must-see” places when we have guests. I took more than a hundred pictures during our visit, so for the next few days I’ll share some of my favourites from the afternoon.