If this is the big time, where are the fans? The stadium is empty. 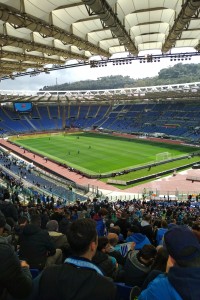 Mind you, Lazio is the ‘other’ Rome club in Serie A football (soccer), the top tier of the sport in Italy. Roma is much more popular. Still, on a Saturday afternoon, on a holiday weekend, I would have expected more than what I estimate is 20,000 people – the stadium seats 70,000.

I’m having a little bit of difficulty believing that I paid more for standing room to see the Freiburg Wolves hockey team than to see this top-level Italian team in action. After all, football is a religion here at a stadium less than an hour’s walk from the Vatican. But the visitors, Benevento, are at the bottom of the table and facing relegation, and the fans have stayed away in droves. I guess they figure it won’t be entertaining.

No instant replays on the large screen (for reasons unknown to me) means I can’t see exactly what Benevento’s keeper did in the tenth minute to earn a red card. I saw the play and thought there would be a penalty kick, but didn’t know what would warrant an ejection. On the replay I cold see that it was a hand ball outside the box – I had wondered if it was an elbow to an opponent’s head. Unlike in hockey, where the goalie’s penalty is served by a teammate, here the keeper was gone for good. 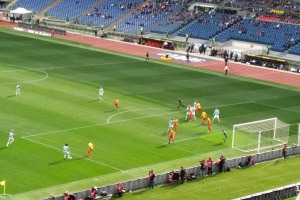 It was already a David versus Goliath match-up; playing against a team a man short should have been easy for Lazio. But somebody forgot to tell the Benevento players they were outclassed. Yet at the half, the game was tied 1-1. You aren’t supposed to be able to do that short handed.

Benevento though was playing as a team, classy and determined. The Lazio players were the ones who seemed outclassed. When Benevento scored to take a 2-1 lead you could feel the shock in the stadium and on the field. I suspect Lazio’s coach explained to his players that if they didn’t get their act together quickly that a few of them might find themselves unemployed the next day.

His pep talk worked. Lazio tied the game, and then began to pull away. Playing most of the game a man short meant that the Benevento players just ran out of steam, and the goals just kept coming. Final score: Lazio 6 Benevento 2. 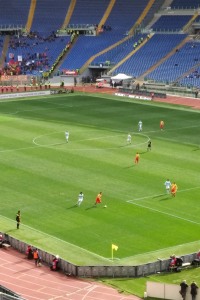 There’s something that makes me want to cheer for the underdog. I think that is true for most of us. I kept my sentiments quiet of course, given that we were sitting in the section of the stadium reserved for the rabid Lazio fans.

The attraction of the underdog I think stems from our view of ourselves. We are all underdogs, all facing situations in life where the odds are against us. Yet we persevere. Giving up isn’t an option. David knew he was outmatched when he went up against Goliath – but he also knew God was with him. The Benevento players knew realistically that the game was lost when their keeper was given a red card so early in the match. But they didn’t stop, providing exciting football to the very end.

I was hoping they would pull it off, that a team outclassed at the onset of the game would somehow find a way to deliver a shocking result. It didn’t happen. Goliath was bigger and stronger and wore them down.

When you are in a David versus Goliath situation the odds favour Goliath, as Benevento found out playing against Lazio. Hard work alone doesn’t change that. David prevailed because he knew he was outclassed and turned to God for his strength.

That is something to remember the next time you are in an underdog situation. It is probably not your talents or abilities that will give you the victory. Like David facing Goliath, the underdog needs that relationship with God to overcome the odds.