When I was in Rome last weekend I noted that Google Maps was doing something with the children’s character Waldo. I didn’t click to find out – we had a guide to Rome so the map application wasn’t necessary.  I meant to at some point go back to find out what was going on, but forgot about it.

Then yesterday my friend Paul posted his thoughts on Google and Waldo. I sent him an email response, most of which I will reproduce after his post. If you haven’t checked out his blog, it is well worth a visit!

The Waldos in Your Life

Google is running some type of contest involving Waldo on Google Maps. I really don’t have time to figure out what it is, and when we were in a unfamiliar part of a city this week, my wife didn’t care for having more clutter on what is already a small screen on her phone.

Where’s Waldo? For me that question might be, ‘Where’s Tim?’ Maybe you have someone in your life who has disappeared off the map. 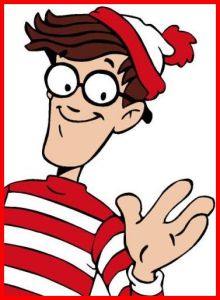 It’s weird saying that in an age of social media. There really is a Tim, I played at his wedding and we have a number of people in common, but getting anyone to actually track down an address — email or physical — has proved elusive. I’ve had people write down my info and promise to find a way to relay it to him. Then, more silence.

Can you imagine people of an earlier generation trying to reconnect before Facebook, or even the internet itself? Would they write letters and wait weeks for replies that might never arrive?

The Salvation Army works with street people. I don’t know if they still do this, but for many years they offered a find service, probably mostly used by family members. Of course, you could also run a personal ad in the newspaper and hope the person had a contact who would read it

A few years back there was also a Dave. I managed the band he played in. I sort of knew the where in this case, but I couldn’t get anyone who was in closer proximity to him to forward an email or even a phone number. We finally did connect. He had never received any of the messages. In one case I discovered a pattern of a Christian leader repeatedly ignoring email, not only on this but many other fronts. I know she’s a busy person, but rude is rude…

…I’ve always believed it’s important to stay connected to the people who knew you when. (Yes, that’s a complete sentence.) I think it keeps us grounded to have touchpoints with people who were involved in various stages of our lives. Perhaps it even keeps us humble…

…So who are the Waldos in your life?

Is locating them an obsession?

Do you ever wonder if they’re still alive?

Have you asked yourself if you did something to offend them that would make them want to break contact?

Is there an important message you want to give them, or something you need to get off your chest?

I hope you find your personal Waldo.

There were a lot of things I wanted to say to Paul when I read that, but I was in the grocery store so I limited myself to the words below – which are probably enough for today anyway. I have a couple of posts drafted that touch on the nature of friendships, so I expect to return to the topic at some point in the future. My email read:
There are so many people – including some who I know don’t want to be found because they have abandoned their faith and assume I would judge them.
It is amazing how easy it can be to find someone – but you have to be creative at times. I ask myself though, what is the purpose of reconnecting? Some friendships really are just for a season.
How many of your high school classmates are you still in touch with? Would you be friends if you met them today? My 50th reunion is coming up soon. I went at 30. My best friends from HS didn’t talk to me – but I had a great weekend with those whom I was never close to in high school. But we haven’t stayed in touch.
We live in an age when finding people and staying in touch is easier than ever before. But we still don’t.
I wonder why that is?