American music icon Charlie Daniels died Monday, felled by a stroke at age 83. I only saw him perform live once, about 1980 I think, in Ottawa. I did read is autobiography though, and reviewed it here in October 2017. No need to add anything more.

He’s a simple man (by his own words) and releases his autobiography today. If you aren’t already a fan you probably won’t care enough to read it. But maybe you should reconsider Never Look At The Empty Seats. 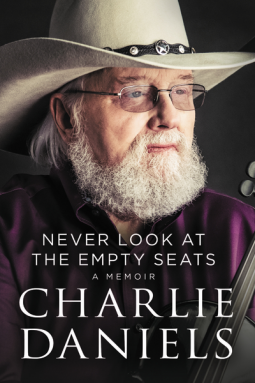 Charlie Daniels has spent more than 50 years as a musician, doing his own thing for the most part, with a considerable amount of success. He has crossed paths with hundreds of musicians from the famous (Bob Dylan and Leonard Cohen come to mind) to people who have never been heard outside their home towns. He has a story to tell, and if you listened to pop or country music in the past few decades you’ll probably find out some interesting things you didn’t know before.

Charlie is probably best-known for “The Devil Went Down to Georgia,” his breakthrough hit that crossed radio formats back in the 1970s. If memory serves me correctly, I saw the Charlie Daniels Band in concert at the Ottawa Civic Centre about that time. I remember the show being enjoyable, but I was only there to hear the one song. Or maybe it was someone else on the bill I was going to see, and The Charlie Daniels Band was an afterthought.

Autobiographies can be an exercise in public relations. They don’t always tell you what you know and at times it is difficult to discover the real person behind the words. I get the impression though that the real Charlie Daniels shines through this one. He’s a believer in hard work paying off, in playing his best for those who have come to see him. The size of the crowd doesn’t matter, you play for those who are there, and don’t fret about those who didn’t buy a ticket. You Never Look At The Empty Seats.

This is a story of a life lived on the road. But it is more than that. It is a story of the value of friendships. He may not mention the name of every musician he’s ever shared a stage with, but it felt like it at times as I read. I realized that for Charlie Daniels people are important, he needed to mention those names because it wouldn’t be right to leave them out. It helps that he has an entertaining story or two to tell along the way.

If you’re curious about what happens when the performance stops, you’ll be pleased with the behind the scenes look at the business of being a touring band. Charlie isn’t reluctant to share about the mistakes he made along the way as well as the successes.

One thing I learned that I didn’t know before was about his Christian faith. I knew vaguely that he had made a gospel album, but I tend to not read to much into country music performers who choose to make a gospel record. It at times seems almost mandatory, and I have seen such albums from performers whose lives seemed anything but Christian.

The book does show that a relationship with Jesus is important to Charlie Daniels, important enough that he interrupts the chronological flow of the narrative to make sure the reader understands how serious his faith is to him.

I picked up the book on a whim, but once I started Never Look At The Empty Seats I found it difficult to put it down. That is always a good sign.

“Book has been provided courtesy of Thomas Nelson – W Publishing.”

← In The Vineyards
Thursday Humor →