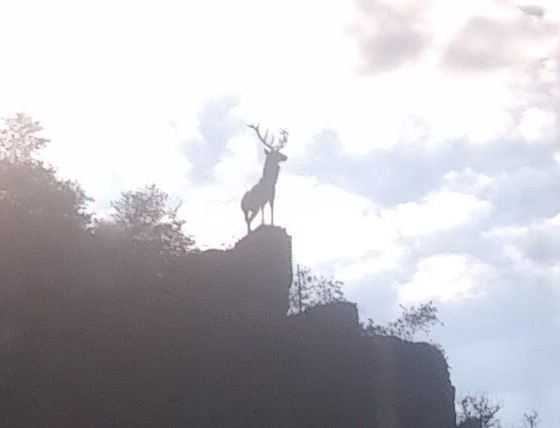 Anyone who has taken the train from Freiburg to the resort town of Titisee knows the stag. As the train goes trough a gorge you suddenly see it on the crest of the cliff above, poised to jump.

You want to take a picture of course, to share the sight with your friends. But  by the time you grab your phone or camera the train is around the bend or in a tunnel, depending on which direction you are traveling.

Welcome to Hirschsprung (deer jump) in the Black Forest’s Höllental Valley. As legend has it, a stag being hunted by a knight from Falkenstein Castle made the jump over the gorge to safety on the other side.

no-one knows how much truth is in the legend. The castle was destroyed by troops from nearby Freiburg in 1388. Records from that time are a little hazy, but the story has been passed down for centuries.

There as been a stag monument on the site since 1856, the first one being wooden, the current one bronze. It is itself more than a century old, with its last refurbishing about a decade ago.

Looking at the valley as it is today, not even super-deer could make the leap from one side to another. Centuries of erosion have widened the valley – the experts say that 700 year ago a motivated deer might have just been able to make the jump. The gap was nine metres back then, and with a good jump a deer can manage ten. An Olympic champion today might get close to nine metres, so the knight was wise to give up the chase.

The first time I saw Hirschsprung was shortly after we moved to Germany. A friend was giving us a quick tour of the area and she pointed it out as we drove past. We have seen it several times on the train to Titisee, but until this week I never thought to take my phone out and try to take a picture through the train window.

The Black Forest is full of tales from days past, things you never learned in History class because they were local events and not widely known outside this area. Those tales can make a visit very enriching.

Tales from this area have been told for centuries. Little Red Riding Hood was heading through the Black Forest to get to Grandma’s house when the wolf beat her to her destination. Hansel and Gretel also takes place here. If you have read any of the Grimm Brothers collection of fairy tales, the forest they mention is this one.

But only if you are passing through and see the deer on the cliff poised to jump, are you likely to hear about Hirschsprung.

← All In The Marketing
If I Complained, Would You Listen? →