The business end of a German PAK 40 anti-tank gun.

Canada’s Second Word War veterans are dwindling as age catches up with them. The European portion of the war ended 75 years ago today. It is a milestone anniversary, but there aren’t the big public celebrations there were 25 years ago. Blame COVID-19 for that.

The youngest of the veterans, those who lied about their age, are 90-years-old now. Most are older. A generation is passing, and with it our knowledge of a turbulent time. 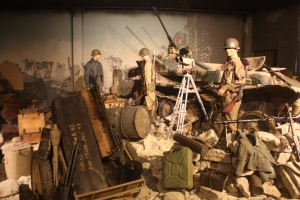 Many of them have reminisced into a tape recorder or video camera, so the record of what they accomplished will not be forgotten. But there won’t be the opportunity to ask questions if something comes to mind for the first time. And invariably there will be something I want to know, and none of the records will have the answer.

Seventy-five years is a long time, longer than I have lived. Probably longer than you have lived too. That war seemed justified to those who ordered it and those who fought it. They wanted to preserve their way of life, something the other side wanted to deny them. Both sides felt that way.

These days wars don’t seem to have the same clear delineations between the good guys and the bad guys. White versus black seems to have blended into different shades of grey. Syria’s president Assad is a ruthless dictator by all accounts – but many of those who are still (after 10 years !) trying to depose him have murky human rights issues themselves.

Which side would you choose in the civil wars in Libya and Yemen? Is one clearly on the side of the angels? (Did you even know there were wars happening in Yemen and Libya? They don’t get the publicity Syria does.)

Seventy-five years ago, on V-E Day, people were dancing in the streets of Canada, delirious with joy at the end of the European war. Right had prevailed.

I’m not sure we will again have such a national outpouring. The Korean conflict in the early 1950s seemed somewhat clear-cut when you were choosing right versus wrong. That may be the last time Canadian troops will fight in such a war.

Certainly our decades of United Nations peace keeping missions don’t seem to evoke the same response. Nor do our NATO and other allied military efforts. The Afghanistan conflict, our longest war, continues today – more than 40,000 fatalities last year – though Canadian troops are no longer part of the battles.

Ask any one of the aging Canadian soldiers who took part in the Second World War, and they will tell you theirs was a just cause. They were fighting for human freedom.

When I started writing this post I wasn’t thinking of the changing nature of war. I was thinking that old soldiers do indeed die.  I was going to suggest that you take the time to get to know some World War II veterans before you no longer have the opportunity.

I got sidetracked, but that would still be my suggestion. When this COVID-19 thing is over, go find someone to talk to. Your life will be richer for it.

← From The Tower
Saturday’s Conspiracy Theory →