In a land where the ruins can be a couple of thousand years old, a 20th century relic doesn’t stands out.

This German pillbox, part of the World War Two coastal defence system, is on the edges of Monterosso al Mare, one of the villages of Italy’s Cinque Terre region. It serves as a reminder that even remote areas can be touched by war.

We hiked along the Cinque Terre coast a decade ago. My wife had discovered it in a guide book – five villages more or less untouched by modernity. Oh, they had electricity and indoor plumbing, but the villages didn’t look all that different than they did hundreds of years ago when the only way to get to them was by boat.

The lookout tower above the pillbox dates from the 16th century. I guess it was seen as too exposed to be useful in modern warfare, so the German troops built their stronghold below.

You would think there was no reason to fight over this quiet coastline, over these small villages with their gentle inhabitants. We humans though can find a reason to fight about anything. So we have to prepare to defend ourselves.

If I were a military commander, this part of Italy wouldn’t be high on my list as a possible place to stage an invasion. High cliffs would make an assault from the sea difficult. When the invasion did come, it was hundreds of kilometres south of Cinque Terre.

The pillbox was an interesting bit of recent history to consider – and the view of the town from the inside is different. 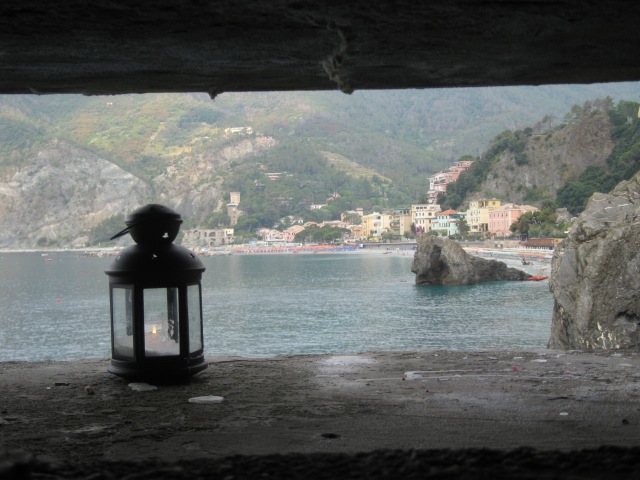