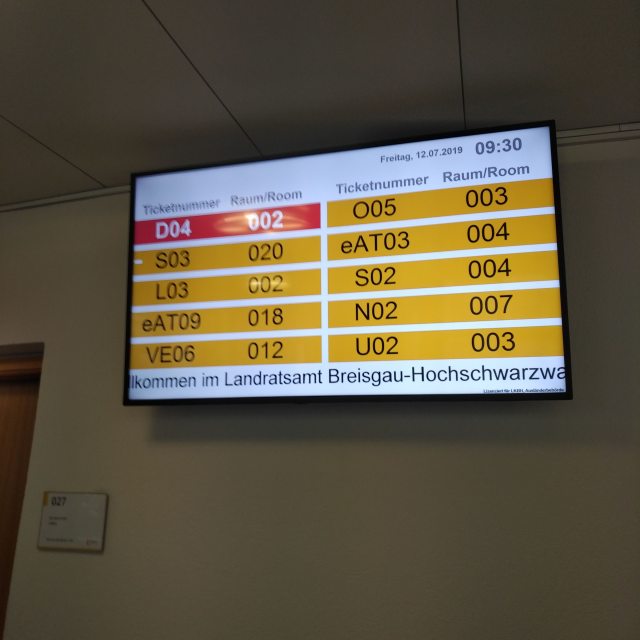 There is a feeling of hope in the room. Fear also. What is going to happen next?

On a rainy Friday morning it seems like there are a couple of hundred people waiting in the corridors of the Landratsamt (that’s District Office in English), waiting for their number to appear on the screen, waiting to see an immigration official.

Everyone wonders if they have filled out their paperwork properly. So many pages, so many questions. What happens if you make a mistake? Will they send you back to the country you fled?

Arabic seems to be the most common language. The little German I hear comes from translators, which many have brought with them. It does seem though that everyone here speaks a little bit of German, just not enough for a formal interview. I understand that – I’m in the same situation.

One of the translators approaches my wife with a question. He assumes she is German and know the system. We don’t look Middle Eastern like the majority of the people here. He’s from Damascus and has only been here three years, but has learned enough of the language that others turn to him for help.

The wait is long. No-one has ever accused bureaucracy of moving at light speed. The office is open until one p.m. I think, but they stop issuing numbers around 11 a.m. Too many people, and each case takes time.  You have to present your paperwork, answer some questions, copies are made, questions asked, and then you have to pay for your  visa. If they approve you. Maybe refugees don’t have to pay – I don’t really know the system.

We brought a lot of paper With us, much more than they will need, but all things that we could theoretically be asked to prove. Health insurance, rental agreement, banking information from both Canada and Germany, receipts for language courses and much more. It must be more unnerving for the refugees and economic migrants. They are coming here looking for a new life and most don’t have much documentation or familiarity in dealing with bureaucracy.

The corridor is filled with small children, who are finding the wait interminable. They aren’t nervous, like their parents, just bored.

There’s not much for a child to do here, and they don’t understand why they can’t go back to where they live. It isn’t like they could be left at home; immigration officials need to see the entire family.  There is a lot of crying and whining – it is noisy in here.

Sitting here, I once again marvel at the willingness of Germany to take on this task. A couple of hundred people here, but a couple of million refugees across the nation in the past five years (890,000 in 2015).

That is a lot of people to try and integrate into society. It hasn’t always been smooth. At times the system seems overwhelmed. Certainly those who have come as migrants and refugees find trying to cope with the bureaucracy overwhelming.

But it is better here than where they came from.

← Meet The Uncommon Meat
A Nice Way To Die? →