Locked Up For Love

First time I saw a railing full of lovers’ padlocks was in Italy, as we walked between two villages of the Cinque Terre region a decade ago. I gather the practice has become more popular; these days it seems there are locks everywhere.

Which presents a problem for municipal authorities. Love is great, but not that great when a bridge is threatened with collapse due to the weight of padlocks placed on its rails by lovers wanting to memorialize their togetherness. Some places routinely cut the locks off.

The walkway in Freiburg’s Seepark has a boardwalk that goes out into the lake, an arc of sorts, allowing people to get a view of the water and the fish. On my first visit I stuck to the shore route, but the last time, looking for variety, I tried the boardwalk. It was there I saw the locks. 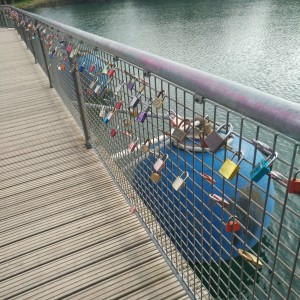 I will admit that I haven’t paid much attention to the practice before. I know people buy a padlock, attach it to a bridge railing and throw away the key, usually into the water below. It signifies, I guess, that their love is permanent, that nothing will ever separate them.

It is a nice sentiment, though I must admit the ancestral Scotsman in me bemoans the waste of a good lock. Maybe I’m not romantic enough. (My wife would probably agree with that.)

One thing I noticed in Freiburg that I don’t remember seeing in Italy a decade ago is that the locks are engraved. Couple have taken them somewhere to have their names and the date (a wedding date perhaps) etched on them.

That makes it a far more interesting spot for visitors. You can wonder who Edina and Matthias are, and whether their love has lasted as well as their lock has. Some couples have returned to the walkway in subsequent years, adding additional locks as they have added children to their family. I really liked that – the park is already great for children, and to be able to point children to their own lock would make it that much more a special place.

Looking at the walkway railings, I think it will be a few years before the city has to cut the locks off to prevent the structure from sinking into the lake. There are hundreds of locks, but I imagine it would take tens of thousands before the weight becomes a problem. Then again, I’m not a structural engineer, so I’m only guessing.

Sometimes it seems like we live in a dark world. Seeing these locks, each one placed in optimism and hope as an expression of love, reminds us that there is light in the darkness.