Weinberg in Flammen – I

Most people have heard about the big festivals of the world, such as New Orleans Mardi Gras and Rio’s Carneval. But you probably haven’t heard of Weinberg in Flammen.

Saturday night was the annual “Vineyard in Flames” festival in Britzingen, or maybe I should translate that as Wine Hill in Flames.” Britzingen is about five kilometres from Sulzberg, about an hour’s walk.

Last year we passed up on the festival, knowing nothing about it except the name. We didn’t have a car then, and the prospect of walking an hour back home in the pitch dark on unfamiliar trails was less than appealing. This year was different.

Saturday afternoon I was driving some of our friends to and from an event in Mullheim at our church. There is no public transit on Saturday afternoon, so I volunteered. That meant I passed through Britzingen several times and could see the preparations. Especially on the return trip, when it was already dark.

It was like a scene from an old black and white horror film. Hundreds of citizens on the streets in front of the Britzingen winery (which I presume was a sponsor of the event). Many of them were carrying lit torches. As I drove by I could see that some people had already started moving up the hill – you could see the line of fire on the way to the top. How could we resist checking out something like that? Maybe at the top of the hill there would be a castle with a mad scientist and a monster – in the Black Forest such things are not impossible.

But first I had to finish my taxi duties, which mean that by the time we arrived in Britzingen and found a parking spot ( a considerable distance from the hill) it was 8:30 and the fireworks had started. By the time we got to the base of the hill to start the climb, they were over, and there were people (families mostly) streaming down the path. Britzingen is a small place, population 991 according to Wikipedia, but my estimate is there were close to 20,000 on the hill for the fireworks.

Fire is a big component of this event. There were the torches and fireworks, and the path up the hill was lit by burning logs every 100 metres or so. Which is a good thing, because otherwise it is pitch black.

At the top of the hill there was a beautiful view of the valley looking into France, and there was a party going on. More on that later. For now, just a few pictures. 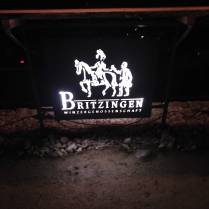 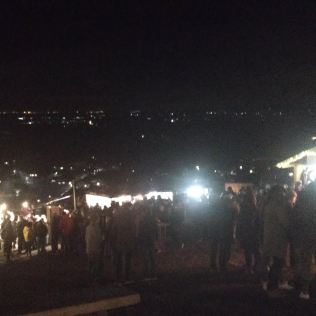 ← Wanted: Leaders For Our Times
Weinberg in Flammen – II →