Wanted: Leaders For Our Times

Ever have a love/hate relationship? That’s what I have been having with Moral Leadership for a Divided Age. 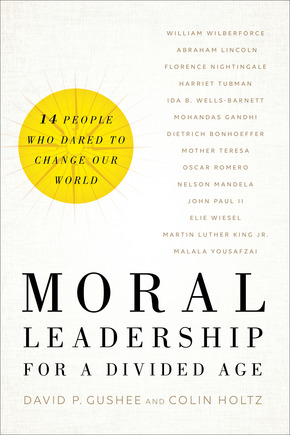 The premise is simple enough. If you want to understand leadership, just look at leaders. In an age where moral authority is confused with celebrity, when Hollywood shapes our culture, at least the part that isn’t being shaped by fake news online, what is moral leadership? How can we aspire to it? Is such a thing even a possibility?

David P. Gushee and Colin Holtz are two American university professors who try to answer those questions in this book, fourteen short profiles of leaders, only one of whom is still alive. By seeing what has been, we see what could be, what should be (and sadly, realize just how few true leaders we have today).

These are excellent portraits of heroes of the past. There are huge issues in the lives of some of these people, issues that might disqualify them from being role models – and the authors tackle those head on. Given the space constraints, they have done an admirable job of painting a picture of a culture and a leader.

Each one considered is worthy of a whole book, or maybe more. As part of my master’s degree I took a course on Gandhi, with the end result that I admired him much less at the end than at the beginning. A little knowledge can be a dangerous thing. I was surprised to see Gandhi included in the book and had thought Gushee and Holtz might not deal with some of the more controversial aspects of his lifestyle, but they tackled them head on, admitting that they too had debated his inclusion.

On the other hand, my respect for Nelson Mandela was increased by what I read.

Some of those profiled in the book, like anti-slavery crusader William Wilberforce and civil rights leader Martin Luther King Jr., I already knew a fair amount about. Others, like nurse Flora Nightingale and journalist Ida B. Wells-Barnett were only names from history. I knew them but couldn’t have told you much about their lives or their causes. It was a positive learning experience, with the stories told in an easy style.

Each chapter has an overview of the leader’s life and career, followed by a section on legacy and criticism. I found that analysis to be fair and balanced for the most part. I did occasionally disagree, such as with their thoughts on Wilberforce’s concern for the poor. In that case, the criticism was factually correct but perhaps a little unfair. I have worked in Parliament, I know how difficult it is to be all things to all people and get anything done.

There is also a section on leadership lessons in each chapter, moving the book from a history to a practical handbook. Seeing the strengths of these men and women placed in this context allows us to examine the lives of contemporary leaders and see how they measure up. Sadly, most, I think, would be found wanting.

So where does the hate part come in? At the end of each chapter/

That Gushee and Holtz, as professors who teach courses on leadership, would include discussion questions at the end of each chapter is to be expected. However, if they wrote the questions in this book themselves, I would be very surprised. Instead of being aimed at a university audience, or the general public, the questions appeared to me to be aimed at a 10-year-old.

Many of them seemed to be designed to check if you had read the chapter. The answers were there, and you could just check them off, but I can’t see them leading to any significant discussion.

Others were good starting points perhaps, but not really answerable if you didn’t know more about the subject than what was contained in the book. For example, “Why did Bonhoeffer stand fast in resistance when others did not?” If all you know is what you read in Moral Leadership for a Divided Age, how can you be sure you have the whole picture?

I also would have liked bigger questions that related not to leaders past but to the present. A comparison of the qualities of leader X from the past and leader Y from today would be an interesting discussion point. How does Donald Trump compare to William Wilberforce? Or to Mother Teresa? It is a minor quibble, but I found myself getting annoyed at the end of each chapter as I read discussion questions that just weren’t as good as the material that preceded them.

Leaving that aside, if you care about leadership in our society, Moral Leadership for a Divided Age is a book you would do well to read.

← Bell Tower
Weinberg in Flammen – I →