I’ve posted this before, but the topic was on my mind again today. It was one of the first things I wrote when this blog became a regular thing for me back in 2014. I’m a political junkie, but this display was the highlight of my visit to the EU Parliament building in Brussels. At the time I didn’t think of the political significance.

Back then, no-one had ever heard the word Brexit. Now it consumes discussion in the UK and Europe. No-one knows what is coming next, everyone expects it to be messy. Kind of like a magnified divorce.

I wonder if there is a museum highlighting broken political relationships. Maybe that is every museum that deals with civilization.

The broken camera made absolutely no sense to me; or to Vivian for that matter. Why would a non-functioning digital camera be the first thing we would see at the entrance to The Parlementarium, the museum that tells the history of the European Union parliament? And why was there a story about how this camera had been used in someone’s relationship? How does this relate to the European parliamentary process? It was confusing, to say the least. 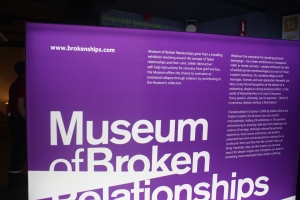 The answer became clear after we had traversed the entire museum (taking a couple of hours, though you could easily do it faster. I like museums, even though the EU one seemed to me to be more propaganda than analysis). The camera, and a couple of other items at the front of the museum turned out to be part of an exhibit, the rest of which was placed just before the exit, a traveling exhibition from the Museum of Broken Relationships.

There must have been a couple of hundred artifacts on display, each sent to the museum by someone lamenting what once was and what might have been, mourning a lost love, or perhaps just a lost lust. The items were each accompanied by a background story sent by the donor, explaining the significance to a once vibrant relationship now in ruins. In addition to the camera there were books, hats, shirts and other items of clothing, jewelry, toys, stuffed animals, travel guide books, camping gear, a collection of aide-memoires sent in to expunge the memories, or at least put them to rest. 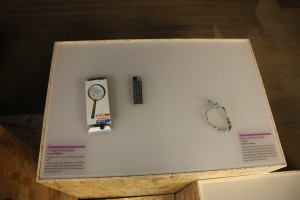 Our European vacation was our 30th wedding anniversary gift to each other. Ours is not a broken relationship, though like any human interaction it has its challenges from time to time. It was fascinating to read other people’s stories. While relationships break all the time, the concentration here was on romantic attachment. I wondered about that, whether romantic relationships are all that matter? Aren’t there other relationships that get broken? How do we deal with those?

I haven’t seen any of my high school classmates for more than a decade. Does that make those broken relationships? I got an email a year ago from a classmate who noticed my name when he was listening to the satellite radio channel I program for Galaxie (now Stingray). I responded but didn’t hear back from him. Probably just as well: we had been acquaintances in high school, not close, I’m not sure there was a friendship to rekindle, especially not when separated by half a continent. Does that count as a broken relationship?

A long time ago I attended a seminar on relationships given by a guy named T.V. Thomas. I don’t remember much about it, but I do recall him talking about the human capacity for maintaining relationships. He maintained that we have limited capacity for close friendships, that such relationships take time and effort to maintain, which means most of us only have three to five close friends. The next level after that is a bigger one, I can’t remember how many people he said we could handle in that stage, perhaps 100, but don’t quote me on that. Those on that level are friends, but you probably wouldn’t call them to help with a 2 a.m. emergency. Then there are all those other people we call friends. We know their names, but that’s about it. I suspect that’[s what most Facebook friends are for most people.

Interpersonal relationships have always interested me which may be why I found the Museum of Broken Relationships so compelling. I read every explanation of the items on display. I couldn’t help myself. One of these days I’ll head to Croatia to see the whole museum.