Another Flohmarkt (flea market) is being held today in Sulzburg. As I post this, it has about five hours left to run.

We just had one about a month ago, and I have a story to tell from that one, I think on Monday.  It’s not something I have been putting off but rather something I just discovered. Today, just some pictures in case there is anything you want me to pick up for you.

I did have a battery powered amplifier and guitar cable in my pocket, just in case there was an electric guitar on offer, but I didn’t see any. I only saw the one stringed instrument, and I’m not sure what it was.

Last time out I didn’t buy anything. Today I managed to pick up a camp chair. If you are North American you see these everywhere, as low as seven dollars in grocery stores and discount stores. you know the type, they fold up and you can carry them in a bag over your shoulder. Here I have been looking everywhere for seven months with no luck. I wanted one so that I would have a place to sit when I attend a local football (soccer) game. There are no seats here, everyone stands – but I prefer to sit to watch a game. I paid eight Euros for this chair, a little pricey really, but I knew that there was no way kit would still be around later in the day when vendors are more inclined to dicker. Sure enough, its twin was gone by the time I made a first circuit of the vendors. 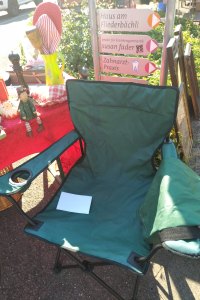 I also picked up an almost new clothes iron. I have been using a third-hand one held together by masking tape. Back home I can get a very nice one for 15 dollars, or a super fancy one for about $40. Here the cheapest one  have seen is about 80 Euros, though I know I could find one cheaper if I tried.  The vendor was trying to tell me that a new iron would cost 120 Euros, as he offered me one for 20. I was able to take it home and try it out, and it worked nicely so I bought it – even though looking online I could see that the price for that model was only 63 Euros new.

Anyway, here are some photos of the merchandise. I may go back later and see if I can negotiate a price for the stringed instrument – it would look good hanging on my office wall. I’t’s probably more than I want to pay, but it is a 60 second walk to the market square, so I might as well try.

And as always, if you see something you want, I can pick it up for you. The Flohmarkt runs until 5 p.m. German time. 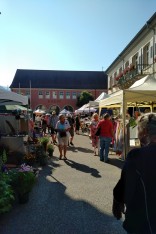 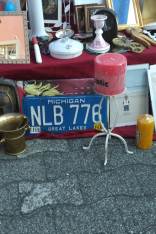 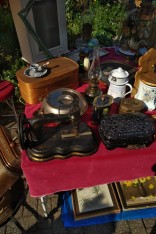 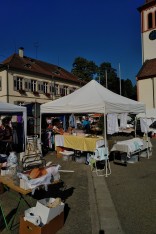