Last time it was Rome’s Olympic Stadium and the cream of Italian soccer. Today it is Sulzburg, and I don’t know if you can sink lower than this.

This afternoon’s previous match, which I didn’t arrive in time for, was between SV Sulzburg and SV Tunsel in the county C league – the game I’m watching is the B league teams from the same community. Sulzburg doesn’t have a team in the county’s A league. I have no idea how far below the Bundesliga, the top tier of German soccer, this is, but you probably can’t see the top from here. 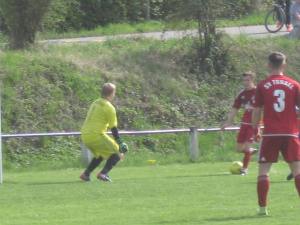 These young men are, I presume, playing for the love of the game, with perhaps a little bit of civic pride thrown in. It’s tough to judge from one game just how talented these players are, but the level of play seems about on par with my son’s high school team.

I can’t decide if the Sulzburg squad lacks talent or just lacks discipline. At the half they trail 3-1. Certainly, the own goal came on an undisciplined play – the keeper wanted the ball and his defender swooped in instead and put the ball into his own net. The team doesn’t seem to have a game plan, or at least not one that would garner success. That would be a coaching issue.

No matter what, the game is entertaining. I can see spending a quite a few Sunday afternoons here this year. The concessions are doing a booming business. There’s a popular drink that I don’t think you could pay me to try. It looks to be two thirds beer mixed with a third of cola.

Standing in the hot sun I am regretting not having brought a chair. Then I remember I don’t have one in Germany to bring. It appears no-one else has either. I guess portable seats aren’t popular here. I know standing is a tradition, but I like my comforts. In theory I should be able to buy myself a portable chair. Practice might be different. (I looked the last time I was in a home and garden type store. No luck.)

Halfway through the second half I’m asked for three euros admission. I suppose I could have said no, it seemed like it was voluntary, but I want to support the local team. Given that I paid only 10 euros to see Lazio take on Benevento in Rome, this game is overpriced. Then again, I didn’t need airfare to get to this one.

I have at times lamented that Sulzburg is a tiny village. That really hit home when I saw the name of the business that sponsored the club jerseys – it is located in the next town.

The game is entertaining, and the teams relatively evenly matched. Sulzburg loses 4-1, but it could have been closer. There were a few undisciplined plays that cost them. If you aren’t as talented then you can’t lose sight of the game plan. Maybe I am being too harsh.

Looks to me like the crowd, such as it is, is comprised of parents, siblings and girlfriends. Not surprising at this level. Still, what else can you do on a Sunday in Sulzburg. I’ve already hiked through the Black Forest, and through the vineyards. There really should be more people here. Maybe there will be for the next game.