One of the most influential people of the 20th century, a man whose impact will continue to be felt for decades, died Wednesday. Billy Graham was 99.

He was the best-known Christian evangelist of his time, a man who spoke before millions of people during his career and was an advisor to presidents and kings. His celebrity was such that people who had no previous interest in Christianity would attend one of his events to hear him preach, just to say they had been there.

I remember the first time I heard Billy Graham live. I paid an admission fee, something that would never have been allowed at his public events. But this one was private., if something attended by 18,000 people can be considered private

It was July 1980, and the Baptist World Alliance was meeting in Toronto. On one of the evenings Billy Graham was going to be the keynote speaker. There are a lot of Baptists who go to these events, but I had heard that there were going to be a limited number of tickets available to the public. The event was being held at Maple Leaf Gardens, normally a hockey cathedral. There were still a few seats left up in the rafters for those who weren’t attending the conference but wanted to hear Billy Graham preach. Five dollars each, which I remember at the time thinking was expensive.

I took my girlfriend, who four years later would become my wife, telling her she should at some point in her life hear Billy in person, that it was an event. I also convinced a rock star friend who would later become a pastor himself, that it was something he should check out also.

I don’t remember anything about Billy’s message that night. Not surprising when you think about how long it has been. I don’t remember his messages when I heard him again in 1998, the last time he came to Canada for a major event. That time he was in Ottawa for four days of evangelistic rallies. 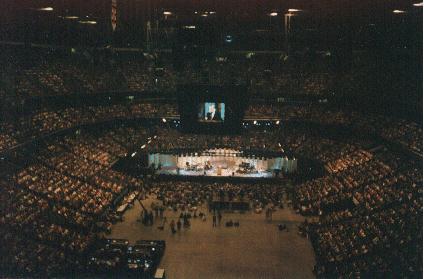 Can you spot me in this photo taken at the Billy Graham event in Ottawa in 1998? I’m sitting at the press table on the left side of the floor. No, I can’t make me out either, but I know I’m there. I found this photo online today and borrowed it. I didn’t know Tony Copple, the photographer, when he took this shot, but have met him since. It’s a small world.

We were living in Pembroke then (a two-hour drive away) and I didn’t make it to the press conference that kicked off the event, so I didn’t get to meet the man. I was though very impressed with the efficiency of the Billy Graham Organization and how well the event was organized. The whole city was talking about Billy Graham, and in a positive way. That isn’t something you expect – usually conversations about Christians tend towards the negative. (I think that negativity is because people are uneasy when they reject the gospel, they feel a need to be negative, so they can avoid the implications of their choices.)

The arena was full every night, and there were thousands more gathered in the parking lot, watching the proceedings on the big screen set up there. Billy spoke of the love of Jesus Christ for everyone. Lives were changed on those nights.

Our society has changed and, in North America anyway, the style of Christian evangelism that Billy Graham utilized so effectively is no longer in fashion. I doubt there are many non-Christians in Ottawa these days who would consider going to hear a Christian preacher at the local hockey rink.

Maybe I’m wrong about that. I hope I am. Billy Graham may have gone on to his heavenly reward, but the issues he addressed still need to be raised and considered. Because, as he would tell people, it wasn’t about Billy Graham at all, it was about you and your relationship with God. It was about Jesus Christ and his love.

Or, as the billboards around Ottawa proclaimed in 1998, in a town where people were obsessed with right versus left (as in politics), he was there to talk about up versus down.

That’s still the question each of us faces today. Up versus down. Heaven or Hell. The choice is yours.