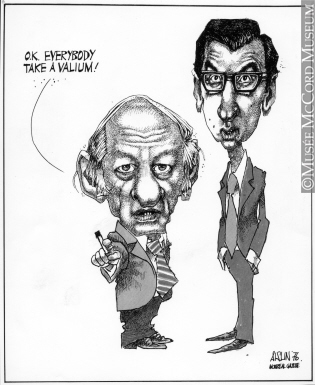 It’s an iconic editorial cartoon, 40 years old next week and so appropriate for today when half of Americans, more or less, are bemoaning the outcome of the presidential election.

In November 1976 it felt a little bit like the end of the world too. In the Quebec provincial election the governing Liberals had been dealt a stunning blow, losing to the separatist Parti Quebecois. Was this the beginning of the end of Canada?

Turns out it wasn’t. The PQ has formed government a few times over the years since, and twice held a referendum on Quebec independence. Talk of holding another one pretty much sealed their fate in the last election and they went down to a crushing defeat. Support for separatism has waned.

But nobody knew the future when they woke up on the morning of November 16, 1976, to a new political landscape. Everything was uncertain.

Enter Terry Mosher, editorial cartoonist for the Montreal Gazette, who draws under the name Aislin. His drawing of PQ leader Rene Levesque and just defeated Liberal Premier Robert Bourassa captured the angst of the time with the line he ascribed to Levesque: “Okay. Everybody take a Valium.”

Valium has, I think, lost favour as the anti-anxiety drug of choice, but it was the top selling prescription drug in the world at the time. Zoloft leads the way  today. But the idea holds for the United States and the world this morning.

Get a grip on yourself. The election results weren’t what anyone really wanted, Democrat or Republican, American or not. The good news is that it is difficult to completely destroy a country in four years, especially with the American system of checks and balances. True, it may take a while to recover from four years of the incumbent president, but the US has bounced back before. No reason to think it won’t this time.

But for the next four years it might be profitable to invest in pharmaceutical companies who market anti-depressant and anti-anxiety medications. I suspect sales are about to increase exponentially.