I can hear his voice as I read the book, which feels a little strange in a way‎. I still think of him more as a broadcaster than as a writer. The authoritative and somewhat soothing tones are accompanied by word pictures of death and destruction.

I had been on the wait list at the library for months when Don’t Panic finally showed up. With a nod to Douglas Adams, it’s Gwynne Dyer’s look at ISIS and the current situation in the Middle East. 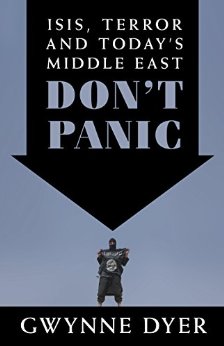 I first became aware of Dyer in the early 1980s, when his television miniseries War was first broadcast. I didn’t watch it then, but caught up a few years later as part of a political science class on conflict at Carleton University.

(About 2004 or 2005 I met Dyer as he was doing a book tour. He dropped by the radio station where I worked and we chatted. I mentioned that we had used his series in class and that the professor had disagreed with pretty much everything in his series. He laughed and named the prof. I gather they had clashed before. )

If you are looking for a book that takes you back centuries to the root of the current Middle East conflict, this isn’t it. If you need historical information on the Sunni/Shia divide in Islam and how it has shaped the Middle East, you won’t find it here.

However, most of us don’t need the roots to understand that there is conflict. We’re not going to be on the committee handling the peace negotiations, if indeed that ever does get constituted, so we don’t need the nuances. We just want to know what is going on. Dyer explains that.

He provides a strategic overview of the conflicts in Iraq and Syria and the rise of ISIS. He makes sense of the alphabet soup of different group names and explains the different motivations behind their actions. They say at the ballpark that you can’t tell the players without a program; Don’t Panic is the program.

Dyer brings a level-headed approach. He’s not looking for votes, he’s a military historian with an impressive pedigree. He has nothing to prove and can use his outsider status to question and criticize.

Maybe I liked the book because so much of what was in it resonated with the way I think. I’m not sure Dyer would agree, but I have long said that the first Gulf War was caused by the lack of missionaries in on the White House staff. They needed someone who was familiar with Arab and Muslim culture, someone who might have been able to suggest ways to diffuse the situation without forcing Saddam Hussein down a road with no exits. Why missionaries? Because they live in the culture and love the people. They wouldn’t have viewed the circumstances solely as an American political problem.

To describe the Middle East as complex is an extreme understatement. I am not certain anyone understands the area completely. And those are the experts.

For the average person hoping to make sense of the headlines this book is a valuable resource. If after reading it you want to go deeper, then you can turn to other sources. But for most of us Don’t Panic will be enough.