Is A New Building Necessary? 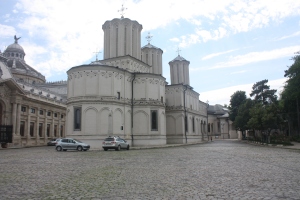 The Patriarchal Cathedral from behind.

As we took a walking tour of historic downtown Bucharest our tour guide pointed out the many Orthodox churches and mentioned that they could be a traffic hazard.

Romanians, she explained, are very religious, and most people are Orthodox Christians. Many people, especially the older ones and taxi drivers, tend to make the sign of the cross when they pass by a church. Supposedly it is not unusual for the cab drivers to use both hands in making the gesture, and with a church building on almost every corner of the downtown area it is not uncommon to see drivers going down the street with no hands on the steering wheel. We were told that the seat of the Romanian Orthodox Patriarch was in downtown Bucharest, so one afternoon we decided to check it out. 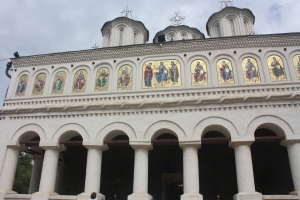 The entrance to the Patriarchal Cathedral.

I must confess the Patriarchal Cathedral was not what I was expecting. I have been in St. Peter’s in Rome, in Notre Dame de la Paix in Yamoussoukro, in great cathedrals in Europe and North America, so I was prepared for an imposing edifice. It is a beautiful church, yes, but not as imposing as the buildings I just mentioned. An interesting collection of buildings and very beautiful, but not something that stands out from miles away.

That may be why there is a new cathedral under construction, though I didn’t find that out until we were back home. Ten times the size of the current building, with a parking garage and hotels – and a cost estimated at a billion dollars. This in one of Europe’s poorest countries. 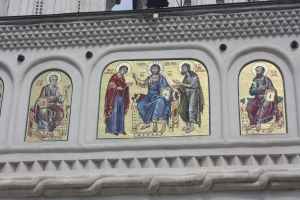 For pretty much all my adult life I have struggled with the idea of building new churches in North America, where you can rent a school gym or community centre and hold your church service there. I know it is nice to have your own dedicated facilities, but they are costly to build and costly to maintain. The church should not be about real estate, but all too often it winds up that way.

I also think of what could be done with the money used to build a new facility. It is not like the work of the church is ever done and there is money to spare to build something fancy. Jesus said the poor would always be with us, and, not surprisingly, he was right. And for the past couple of millennia it has been the church at the forefront of helping those in need in society. Think how much more could be done if you didn’t spend all that money on buildings! 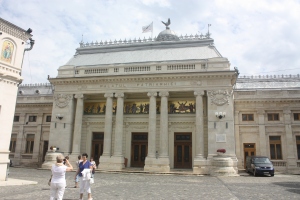 The Patriarchal Palace is beside the cathedral. I thought about knocking and asking for an audience, but what would I have done if the answer was yes?

However, I understand the other side of the argument also – that the church can accomplish more if it has a building, a home base to work from. There is a lot of truth in that position also. I can’t give a definitive answer to the question of whether buildings are a good idea or not; I do know that I am uncomfortable with the amount of money some congregations spend on their buildings.

Which makes me uncomfortable with the amount of money the Romanian Orthodox Church is spending on their new cathedral. I am sure it will be very beautiful, and it will include a soup kitchen. In North America, with our traditional separation of church and state, a related issue would be that the government is partially funding the construction, although admittedly the approximately $10 million is a drop in the bucket as part of the overall cost. Maybe we can talk about church and state relations a different day.

I am glad we walked up the hill to see the church. And I am sure that on my next visit I will see the new one, assuming it is finished by then. Maybe I will be so impressed I will forget about the immense cost. I doubt it.

← A Pioneer Passes On
The View From The Castle →