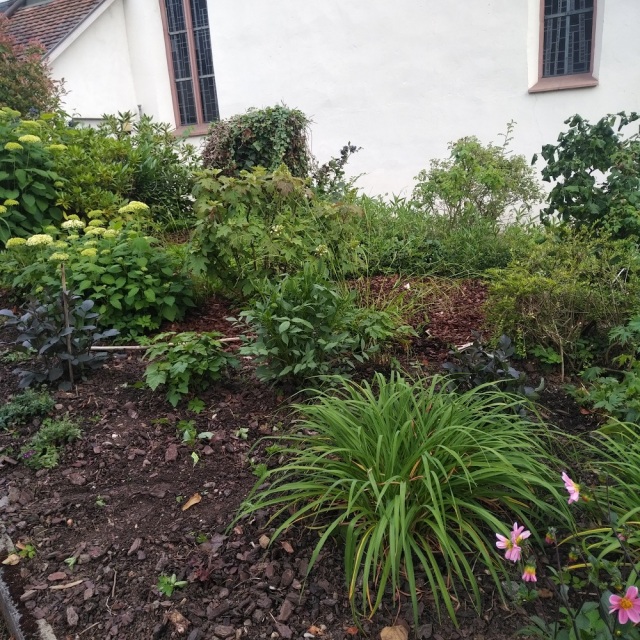 When you are from North America you have a different view of time than they do in Europe (and other places of the world also). Canada and the USA are young countries when it comes to recorded history, something that really hit home on Saturday.

We were pulled off the road in Riedlingen, waiting for a tow truck, right beside the village church. There was a woman there tending the garden, and my wife struck up a conversation.

She’s good at that sort of thing. Even if I spoke the language well, I probably wouldn’t start conversations with random strangers. In five minutes my wife learned all about the woman, her life, life in the village and the church. Then she came and passed it on to me.

There were stories of revolutions and battles that affected the area, obviously long before the woman’s time – she looked too young to remember the Second World War. One thing that did come out though was that the garden she was tending wasn’t always a garden. It used to be the church graveyard.

This didn’t surprise me. The church was built 800 years ago, more or less, and at that time the graveyard was always beside the church. Nor was I surprised it had been moved. It was a busy intersection. I suspected that part of the church land had to be sacrificed to widen the road, which would mean moving the graves.

I’m no judge of horticulture. Still, to me the garden looked like it had been there for a while, so I asked exactly when the graveyard had been moved. I thought it might be 50 or 60 years ago, part of post-war redevelopment in the area.

Maybe it was post-war, though I’m not sure which war it would have been. The graveyard was moved to its “new” location in 1752. Recent enough that we, stranded on the side of the road, needed to be told.

I’m from Ottawa. The town wasn’t founded until 1826, and we don’t talk about what the place was like back then. In 1752 Ottawa was a place indigenous people and European traders passed by on their way somewhere more important. In Riedlingen they were moving the graveyard – an event that is still top of mind for some people.

The history you read in books is the big things. Wars, elections, disasters and catastrophes are prominently featured. Yet frequently it is little things and local events that mean the most to people.

Like moving the graveyard in Riedlingen to its new location. It happened 268 years ago, but people still remember.

← Little Country Church
Hanging In There →