I had great plans for Thursday, then my computer developed a mind of its own. Which is why you are reading this post, a repeat from January 2015.

In our post-modern world Truth seems to have become a relative where it once was an absolute. Perhaps this is a logical consequence of the progression of communications methods during the 20th century.

This first World War recruiting poster is designed to make you feel guilty for not volunteering.

Certainly looking at wartime posters on display in a couple of European museums this past summer I was struck by the simplicity of the message. Things were so much clearer then, it was them or us, black versus right. The Canadian War Museum has a propaganda display available online if you want to see more examples.

Times have changed and printed materials would not be the primary medium used by today’s spin doctors. Twitter and Instagram is the rage. ISIS sympathizers hacked the U.S. military’s Central Command Twitter feed recently, replacing American propaganda with their own. No matter who is putting it out, the intended response would be the same: denigrate (I almost said demonize) your opponent and make yourself or your cause look good.

While we think of propaganda in wartime terms, it is so much more. According to the Canadian War Museum: “Propaganda is the organized dissemination of information to influence thoughts, beliefs, feelings, and actions.” All advertising is a type of propaganda in a way, as is all political messaging. The problem is separating the truth from the lies packaged as truth. Telling a lie convincingly for a cause can have devastating results, sometime unintended ones.

It has been said many times that “the first casualty of war is the truth” (and people argue over who said it first, so I won’t choose a side here) During the First World War both sides ramped up their propaganda machines to full gear. The British, for example, circulated a story that the Germans were using the bodies of the dead to make soap, something that was not acknowledged as falsehood until after the war. 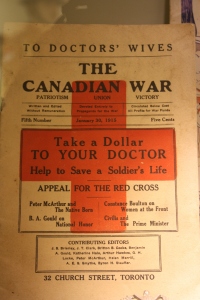 A total war effort sees everyone involved, not just the military.

The unintended consequence of that piece of propaganda was a tendency to discount and disbelieve the first rumours during the Second World War of Adolph Hitler’s final solution, his plan to exterminate the Jewish people, a program we now call the Holocaust. To those who remembered the British claims of the previous war, it just sounded like more propaganda. (Mind you, even if the stories had been believed I don’t know that the Allies could have moved any faster to liberate Europe. That is something we will never know.)

I think the willingness of governments to lie to their people during wartime has had a sad legacy. Politicians and bureaucrats, having discovered what they could accomplish in bending the truth during emergencies, began to use the same methods on a regular basis. If today’s citizen feels alienated from government and distrustful of politicians there may be a very good reason for that. It is easy to rationalize the use of propaganda, to say the end justifies the means, but as I said, there are consequences. As the joke goes: How do you know when a politician is lying? His lips are moving.

Propaganda continues today, both political and commercial, inundating our lives like never before. It seems every time you think about it there are new and increasingly subtle ways marketers attempt to manipulate us. We need to be vigilant, learn to recognize their methods for what they are and react accordingly. 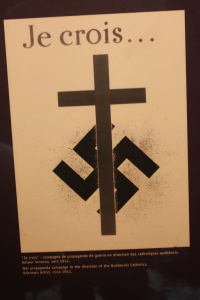 This Second World War poster was aimed at the Roman Catholic population of Quebec.