Over the Christmas break I spent some time cleaning out my digital closet so to speak. I dumped a couple of hundred emails, read and filed some others and did some cleanup on my phone. That’s where I found this un-posted piece from 2017, written shortly after moving to Germany.

After two months here I have probably walked past the place 50 times, but never really paid much attention to it. Then, as we walked through the vineyard above the town, my wife asked “isn’t that building a mill?”

Given my natural male superiority, I explained to her that it couldn’t be. Timber is a major industry here. The only mills in the area would be sawmills, which this obviously wasn’t. The fields are full of grape vines. Nobody was growing anything that would be used by a grist mill.

When we walked past on the street I noted the name on the side of what looked very much like a silo and went online to check. Apparently the building looks like a mill because it is one. So much for my natural male superiority.

I’m not upset at being proven wrong though, because it was a learning experience. I learned something new, though I am still left with questions.

It was good to learn about a local business, the Grether Mill, family owned since 1748. That’s a long time, even by European standards. The mill grinds 25 different flours and four types of grains. I’m not sure if I knew there were that many types of flour. 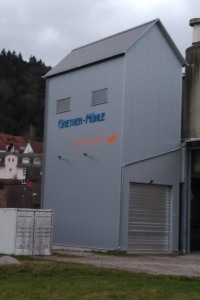 The main building appears to be undergoing renovations these days, so I think the mill is closed right now. No lights on anyway.

At some point though I guess I’ll have to drop in and find out exactly what those 25 flours are. Maybe purchase a sample or two.

What I really want to know though is where the grains they grind come from. As I said, this is wine country. I wouldn’t have expected to find a grist mill here because there is nothing growing locally to grind.

Apparently I am wrong about that too.

I hope I can learn enough German to ask.