There are a lot of important people buried in the Basel Munster (Minster in English – the large former Roman Catholic cathedral). Doctors, physicians, politicians and others who obviously had some status in society. I didn’t recognize any names, other than Erasmus. And I had no idea how he got from Rotterdam to Basel – though I did look it up. 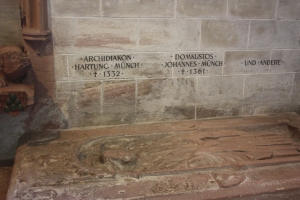 Protestant churches, at least in North America, have gotten out of the habit of burying prominent church members inside the building. If they did, I wonder who would be memorialized?

As in Basel, we have a tendency to look up to people with social status. That may be why in the US it is Hollywood actors who frequently testify at Congressional hearings on whatever the topic. They may not have ever lived on a farm, but they portrayed a farmer in a movie once. In Canada, I think we ascribe wisdom more to our sports figures, who are better known than those in the artistic community.

Really though, being famous doesn’t qualify you as an expert in fields outside your own, no matter how big the pulpit your celebrity gives you. Having high social standing and attending a church doesn’t automatically translate to being a person with a deep and vibrant faith.

In every church I have attended there have been people whose connection to God and Jesus was something to be emulated. Generally though, they weren’t those who were well known in the community, nor even leaders in that particular congregation. What they were is people of prayer.

Frequently these would be elderly women (I presume because women live longer), people you could turn to when you had a problem or need that required divine intervention. When they said they would pray for you, they did – and you knew God was hearing their voices.

So as I stood looking at those memorials on the  wall and markers on the floor I asked, where are the people of faith, the prayer warriors? Why are there no plaques? Have we managed to misplace our priorities?

Prayer warriors tend to go through this life in obscurity. They are unknown in the halls of power, they hold no political office and have no followers on Twitter or Instagram. Yet they can move mountains through the exercise of their faith. God knows who they are, even if no-one else does.

They have no plaques in the great cathedrals, no buildings named in their honor and their names are known only to those in their immediate circle. Which is fine with them. They ask no reward.

I know nothing about the people memorialized in the Basel Munster. Maybe some of them were indeed prayer warriors. More likely though, they were just prominent citizens of the time who could pay for the  space.

Their names are engraved in stone. It is the unknown prayer warriors who have the true memorial, one that is unseen. For they stored up their treasures in Heaven.