On The Slopes of Vesuvius

They never saw it coming.

I think that is a large part of the appeal, why millions of people visit Pompeii every year. It is not just that the city is well preserved thanks to having been buried for centuries under ash and lava. It is that we can empathize and identify with the people who lost their lives in the volcanic eruption in 79 A.D. Pompeii is a vivid reminder of the fragility of life. 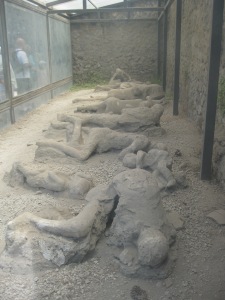 I first became aware of Pompeii in the mid-1960s when it was featured in National Geographic Magazine. That story prominently featured the casts made of the bodies of those who died, caught in the lava and ash and immortalized. When I visited there weren’t very many of those on display. Probably just as well; it is a macabre concept. The thought of being buried alive in molten lava doesn’t seem all that comforting. I’m sure it was an extremely painful death.

On a hot sunny July day roaming the back alleys of Pompeii can be a lot of fun. I didn’t find that I learned a lot I didn’t already know about how people lived back then, but I studied Latin for three years in high school – I knew a lot already.

I suppose Vesuvius could blow again, it is still active though it hasn’t exploded in my lifetime. Scientific advances though would limit the loss of life, though probably not the property damage. We are much more technologically advanced than we were in 79 and better prepared for disaster, at least in theory.

But the principle is with us, though we don’t fear volcanic eruptions anymore. Disaster can strike at any time. We all know that intellectually, whether it be illness, war, famine, fire, flood or volcanic eruption. The four horsemen of the apocalypse ride tirelessly. 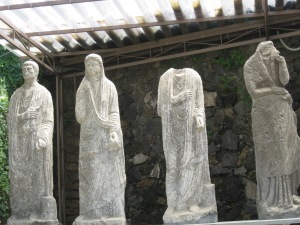 The threat of terrorism has turned the ordinary into the risky in the minds of many. Air travel, once something people looked forward to, is now, endured or avoided.

European Christmas markets have high security as any place people gather could be a target for those looking to kill for publicity for their cause. We live in a risky world.

I wonder if the inhabitants of Pompeii understood the risk inherent in living where they did. The volcano had erupted in the past, but it had been more than 200 years since the last time. Maybe they thought it wouldn’t erupt again. 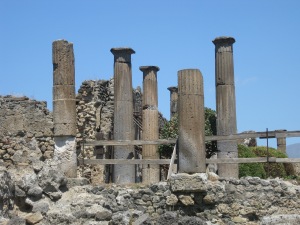 They didn’t have our scientific knowledge. Mount Vesuvius is still an active volcano. In theory it could erupt any time.

There are millions of people living in the area. I guess we humans like being risk takers.

Or are we just too stupid to learn lessons from history?