An Act of Remembrance

As much of the world celebrates Remembrance Day on Monday, I am re-posting some of my earlier thoughts on the subject. Today’s post comes from 2016.

I know her name from looking at Uncle Forrest’s service record online. He left her all his worldly goods, his “property and effects.”  I’m not sure what she received. The file mentions medals and decorations in a notation from 1921. His mother received a plaque. 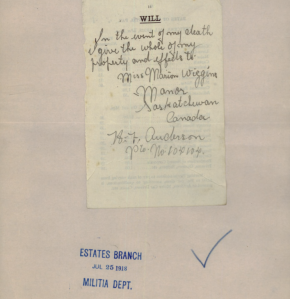 Why does a farm boy from rural Ontario leave his possessions to a farm girl in rural Saskatchewan? How did they know each other?  Was this a romance that would lead to marriage? Why else would she be his heir? What happened to her when he didn’t come home?

His enlistment form notes that he was sworn in to the army in Regina, Saskatchewan, so I guess he was living in western Canada when he signed up in 1915, but why was he so far from home? Did he meet the girl there, or did he go here because of her?

I’ll probably never know. I’m sure if I devoted time and energy I could find out more, but there’s something appealing about not knowing, about letting it remain a mystery.

I did a quick search online last night. I found mention of a woman with the same name in Manitoba, the right age, who died in 1983. That Marion Wiggins was born in Manitoba though. No mention in the documents I saw that she ever lived in Saskatchewan. Yet I still wonder. This woman married in 1925 at age 31, which I would have thought to be old for the times. Maybe it took a while for the emotional wounds of Forrest’s death to heal.

What struck me most about the story of this Marion Wiggins though was that her son was at one point president of a business organization that my father belonged to (and at one point was chairman of). They would have known each other. It seems a little weird to think that but for the war the two men would have been cousins. Those were pre-internet days. Uncle Forrest’s records weren’t available. They never knew. And I will probably never know for sure if my speculation is true. I sent an email to the person running the site, but it bounced back as undeliverable.

War is not pretty. The human costs are greater than it is possible to measure. So many lives lost, so much potential unfulfilled.

On this day of remembrance I will be thinking though not only of those who served and didn’t return, like my great-uncle Forrest, who died of his wounds on February 1, 1918. I will be thinking about those left behind, people whose lives were upended by conflict.

I will be thinking of Miss Marion Wiggins.

← Tonight At Menin Gate
The Other Side →