Can you experience jet lag after a flight in the same time zone? My brain says no. My body says yes.

Just back from a long weekend trip to Rome, and my body feels about as out of whack as it does after a transatlantic voyage. I guess that makes sense in a way – jet lag is about disruption to your sleep cycle, and I have certainly had that.

An early morning flight to get to Rome was bad enough. We could drive to the airport. Coming home though it wasn’t just a matter of getting in the car.

First was the walk to the airport shuttle bus. That was 45 minutes, at 4:45 a.m. Yes, there was a city bus available, but it wouldn’t have been any faster. Then the wait at the airport, the flight and the drive back to Sulzburg. Home at noon meant the day was already eight hours old – with another drive to the airport in the offing.

As someone with Scottish ancestry, I admire frugality. My own especially. I really should have said something though when a colleague asked if I could pick him up at the airport at 11:15 last night. not only was that late for a day when I had been awake at 3 a.m., but I can’t sleep immediately after driving. My brain is still in concentration mode. So that 11:15 pickup further disrupted my sleep patterns.

All of which is to say that today just a couple of pictures of the Colosseum to tide you over until Thursday. There is always so much to see in Rome, which I think is my favourite European city. This time I hadn’t planned on visiting any of the usual tourist sights, but when you are just walking by, why not snap a picture?

By tomorrow I hope my body and brain have once again become synchronized. 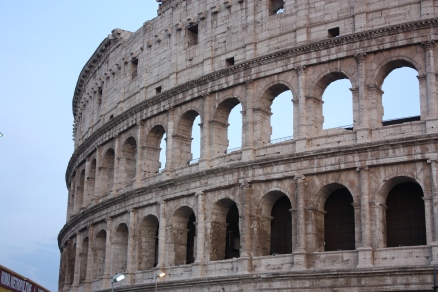