I have posted this before. It was written three years ago today, when the future was a very big unknown. There has been much change in my life in the past three years – change that would not have happened if that surgery had been unsuccessful. It seems appropriate therefore to post it again, for those who didn’t see it the first time.

I’ve been in this room at the University of Ottawa Heart Institute before; at least I think it was the same one. Seven years ago. Waiting for the heart surgeon conducting my mother’s operation to come and tell me how it went. 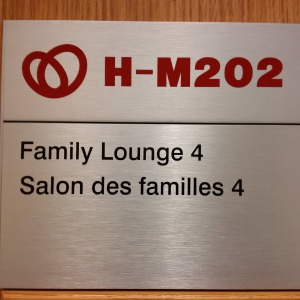 That was a long day. Her surgery began at 8 a.m., and it went well into the afternoon. It was supposed to be four to six hours. After eight hours with no word I was expecting bad news. She was 80 after all. I forget now what the issue was on the operating table, but she recovered completely.

Mind you, she wasn’t all that enthused about recovering. When you have heart surgery (and maybe other surgery for all I know) they bring you out of the anesthetic by calling your name and asking you to cough. I remember this being explained to me, but I forget the reasons; it is irrelevant until and unless my turn comes. My mother was not all that thrilled to be woken up and told to cough. She had been hoping, since she was well past her Biblical three-score and ten, that she would expire on the table, no fuss, no bother. Whatever was happening as she came out of the anesthetic did not match her concept of Heaven, and there was no way she wanted to cough and deal with the bright lights. Sometimes she still complains sometimes that she didn’t die on the operating table – and she is semi-serious about that.

Today I wait yet again. This is “routine surgery” we have been told. Perhaps so, but I am old enough to remember when heart surgery was not routine but the next frontier for medicine. I am also old enough to understand that anytime they stop your heart so it can be operated on bad things can happen. There is a certain element of risk involved. 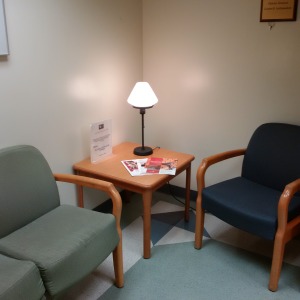 However, there is risk involved in living everyday too, and this is not an elective procedure. The repair being done is required. Yes, there is an option, but the option is to do nothing. Eventually the heart will cease to function completely. Last time I looked, none of us could live without a heart. So I sit here and wait. This is what I signed up for in those wedding vows: for better, for worse, for richer, for poorer, in sickness and in health.

I know God is in control. Actually I have complete peace – which is a little surprising given all that potentially could go wrong. There are literally hundreds of people praying, not just for the outcome of the surgery but for peace for our family as the process unfolds. I can feel it. Then again, there is nothing that worry can do anyway, so why should I bother? It is all a matter of perspective.

A lot has changed in the seven years since I was last in this waiting room. (I should point out each patient’s family gets their own small room while the surgery is taking place. That is a really nice touch. In tense situations you might not want to be sharing space with strangers.) I don’t remember Wi-Fi being available last time. As well as writing this, and doing some reading, I even managed to get some work done. Nice to have a distraction, it makes the time pass quicker.

Today’s surgery also was scheduled for four to six hours, just like my mother’s was. No overtime this time though. Just before the four hour mark the surgeon entered the room. Everything went exactly as planned, the prognosis is good and she should be ready to come home Saturday.

It is the day after Thanksgiving, and I am especially thankful.