I figured the timing was perfect. There were people coming over to our place for the evening, so I could drop by Sulzburg’s market square, take some pictures and go home. No need to subject myself to the music. 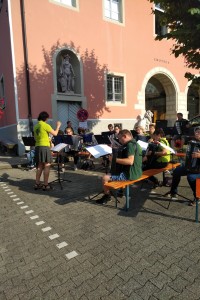 The thought of an accordion band did not appeal to me. It reminded me of the old joke….

An accordion player had to make a long night-time trip after a concert. He was driving a small car, and there wasn’t room in the trunk for both his luggage and his accordion, so he put the instrument on the back seat of the vehicle.

After a couple of hours driving he knew he needed some coffee to help stay alert as he still had some distance to go. At the time, unfortunately, he was passing through a rather run-down section of a big city, the type of area with a high crime rate, where people have bars on their windows.

Still, he needed that coffee, so when he saw an open convenience store he took the risk. He stopped, ran into the store, grabbed a coffee paid for it and ran out. But he was too late. Sure enough, could see the window of his car had been smashed. Approaching the vehicle he could see inside under the bright lights of the store parking lot. There, in the back seat, were now two accordions.

Maybe I have been in Germany too long. I know my soul is starved for some live rock and roll. Or any non-classical live music.

I got to the square just as the band was starting to play. There was no crowd to speak of, just the usual people drinking at the open-air bar. About what I had expected.

The music sounded pretty good though. Don’t just take my word for it, check out this video. I could only stay for a couple of minutes, but I regretted having to leave.

Who ever thought I would say that about accordion music?