My wife mentioned that the walk we were taking last Saturday above the village of St. Ulrich had a spiritual component, that it was kind of a mini-pilgrimage. I thought it might be like walking the stations of the cross, as many Roman Catholics do on Good Friday.

I suppose that isn’t surprising – the town is named after the saint who founded a monastery there, shortly before he died in 1093. The church and monastery are still there; the walk starts behind the church.

We didn’t have the accompanying brochure with explanations of the Lebensweg (Life Path), and I thought we missed a few of the spots where we were supposed to stop and reflect. At first we didn’t know what to look for; later we figured it out and the stops seemed to be more frequent. Surprisingly though, as I look online, I think that we actually did see all the markers and did indeed stop at most of them.

I’m not sure the single words on the markers would be sufficient if you didn’t have a Christian background. Maybe the only people who do this walk are Christians. Or maybe everyone except me has the information before they head out on the walk. There are contemplation questions online, and I can see doing the walk another time with those questions in hand.

It is only four kilometers, and not too steep, which makes it good for a family outing. There are longer trails in the area for those who are more adventurous.

There are also plenty of places to park. I suppose we could have gotten there by bus rather than make the half-hour drive from Sulzburg, but the one bus stop we checked had no Saturday service.

As I mentioned, I didn’t note all the stops on the route. And the church I featured last Sunday is part of the 15-stop trek (its theme is silence). What I can offer you today though is a mini-journey. I’ll give you the word, plus the picture and a few additional words taken from the website mentioned earlier. I don’t vouch for the accuracy of the translations – I took what Google gave, even if I thought there might be a better way to express it.

So today seven pictures, seven stops on a spiritual journey. Feel free to walk along with us. 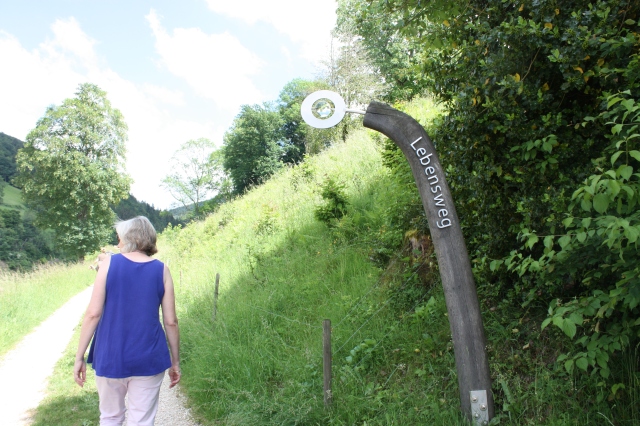 The Beginning: Leave everyday life behind, take the first step, get involved in something new

Source: With the flow of life – against the flow to the source

Perspective: Time out and everyday life

Arrival: In the end – to rest, to listen, to let happen