Random Thoughts From The Game

As I mentioned yesterday, I went to a hockey game last Sunday between the Freiburg Wolves and the Bad Tolz Lions. It was my first sporting event since arriving here. Between periods I jotted down my thoughts. Rather than fix them up in a more coherent form, here are some random observations on the state of German professional hockey.

I’m not sure about the golden helmets.

I didn’t have a program and was kind of confused about their purpose – I had done no pre-game research. It quickly became obvious: each team’s best player wore a golden helmet, setting him apart from the others.

Noe the golden helmet on Freiburg’s #9 – all the other player helmets are black.

I think I would have figured out on my own who the good players were. And I wondered if it was a dubious distinction. The helmet seems to me like painting a target on the player’s back. “Here I am, hit me!” Mind you, while I did see one viscous elbow to the head that the referee missed; I suspect the players don’t need the golden reminder.

This barn feels like it was built in the late 1940s and hasn’t be renovated since. There are a thousand seats – and another 2,500 standing room places. This seems a little strange to me. Freiburg has a population of 225,000. Pembroke Ontario, population 15,000 has an area that seats 3,000 plus probably another 1,500 in the standing room area. The Pembroke Lumber Kings Junior A team (ages 20 and under) could probably easily defeat the two professional teams I am watching tonight. Mind you, Freiburg is near the bottom of the second tier of the German professional league. I think these playoffs are only to determine the best of the also-rans. And to generate some revenue of course.

It’s not that the hockey is sloppy – it is rather entertaining, fast paced, but body checks are few and far between. The fancy plays are easier if you don’t have to worry about being hit.

I didn’t think to ask for a seat, and I figured standing was the more authentic experience anyway. Weird that you can just walk up to the box office and get a ticket for a playoff game.

The concessions are outside the stadium. Another sign that what they call winter here

Crowds for the concessions between periods outside the arena.

would be considered fall in Canada. I think Canadian concession sales would be limited when the temperature hits minus 20. It never gets that cold here. They did seem to be selling a lot of mulled wine though. And the beverages come in a nice plastic cup – that you must pay a deposit for. Struck me as kind of strange – I wonder if they reuse them?

There’s not really a good seat in the house – everywhere I look there is some sort of obstruction, a beam or a post, a sign that this is a very old design. I suppose the view is actually best in the one end that has standing room. I checked it out before the game though and found the thick netting also obstructive. NHL rinks have finer screens to stop fans from being hit.

The crowd is loud and enthusiastic, but I can’t tell how much they really know about hockey. There are a lot of drums here and the drumming never stops. Reminds me a little of roller hockey. The singing is pretty much non-stop, but do they understand the game? 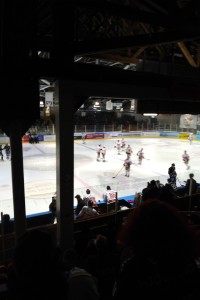 No matter where you are seated or standing, there is a post obstructing at least some of your view.

I should look up the rules.  After two periods I have concluded this is a non-contact sport. That can’t really be true, can it? There hasn’t been one decent hit, which to me makes for undisciplined play. I’m seeing a lot of flash and very skilled and talented individuals on the ice, but I question the coaching. There’s a reason you don’t use your best player as a penalty killer, but neither coach seems to know it. Indeed, the best chances for both teams seem to come when they are shorthanded, but that’s not when the scoring takes place.

I’m also wondering about the economics of this league. In Canadian dollars the ticket sales for tonight’s playoff game are probably about $60,000. Yes, you can add concessions and merchandise to that, but the bottom line is you aren’t going to attract top talent to this league. No-one can afford to pay even the $650,000 NHL minimum salary when your ticket revenue for the season is about $1.5 million. And I don’t see any television cameras, so the teams aren’t making anything from TV rights either. Maybe the first division clubs do. I know they draw bigger crowds. Freiburg can’t afford to move up to the first division unless they get a new arena first.