Continuing from where we left off yesterday, some thoughts on this unique Sulzburg tradition. 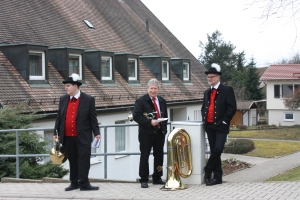 For my neighbour it is a nostalgic time. When she was a child, Weckensonntag was the day the children revived their new spring outfits (in Canada for many families it is Easter for that). So I understand her excitement over what is really a quaint little event. I didn’t ask if she had new clothing this year, if she continues the tradition for herself or her grandchildren.

What struck me most was the speech. As a sign my German comprehension is improving, I understood most of what was said. Mind you, the event is aimed at children, so perhaps the language was simpler than most conversations.

I don’t think such a speech would be possible in a Canadian public square. Politicians and civil servants would have edited out the references to doing things with God’s grace and God’s help. Canada doesn’t like to remember that once we believed in something; apparently religious heritage isn’t an issue in Germany (though belief is probably as rare here as in Canada).

My understanding is that the concern for the poor exhibited by Katharina Barbara 300 years ago came because she believed in God and Jesus and knew that she had an obligation to help those less fortunate. Her belief system had a Christian base.

Politicians these days may understand they have an obligation to help the poor – but they may not understand why. Too often they fail in their duty because their beliefs are built

The Margrave’s residence is now an antique store.

on sand, making it too easy to go with the shifts of culture as opposed to standing firm in what is right.

Three hundred years ago a woman saw a need and acted upon it. Today in Sulzburg they still remember her and her Christian witness.

The lessons of history are important.