Sometimes I suffer from information overload. I have half a dozen posts ready to go, and couldn’t decide which one to use today. So we’ll go with a photo essay instead.

These pictures are from the Stockholm subway. I was impressed with the light and clean feel to what is probably a relatively new system. The place is designed to have a cave-like look – but doesn’t feel claustrophobic. Almost made the high cost worth it; riding is a very pleasant experience.

According to Wikipedia: “The Stockholm metro system has been called ‘the world’s longest art gallery’, with more than 90 of the network’s 100 stations decorated with sculptures, rock formations, mosaics, paintings, installations, engravings and reliefs by over 150 different artists.”

I don’t know about that firsthand – I was only in about five stations and didn’t think to take pictures at first. But I believe it. Turns out the two lines I traveled were the newest ones, which may have added to the modern feel.

So here are a few pictures, snapped in haste. 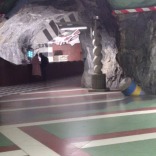 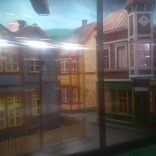 ← The Accountant
The Raccoon →