It is a national historic site – and I suspect most Canadians have never heard of it.

I visited Bellevue House recently, for the first time. It was something that I had been meaning to do for a decade or so, but it never seemed to be a priority. The trip to Kingston, Ontario was to tour the penitentiary, but on this occasion I made the house a priority also.

Fr two years, 1848-9, Bellevue House was home to an up-and-coming young lawyer, John A. Macdonald, who would go on to a lengthy political career and become Canada’s first Prime Minister. He is the father of our country, the Canadian equivalent to the American George Washington, but we, with our national modesty, don’t make a big deal about him. The house is tucked on a back street not far from downtown Kingston and my guess would be that a lot of tourists miss it.

The older I get, the more I admire the career of Sir John A., who brought together people of disparate interests and convinced them they would be better off together. That was no small task, given the cultural and linguistic divides in Britain’s North American colonies in the mid-19th century. 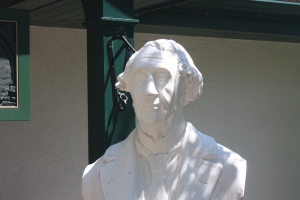 Bellevue House has been restored to what it must have been like when Macdonald and his family lived there, an upper-middle class Ontario Victorian era residence. There are only a couple of artefacts on display that actually belonged to him, but I still wanted to see the place.

My family roots are in small town Ontario, which is what Kingston was when Macdonald lived here, despite it being the capital of the United Province of Canada. Also, my father collected Canadiana from that era. He was always bringing home antique furniture, pottery or glassware. The family residences in the Ottawa Valley, where I spent many an hour as a child, bored to tears waiting for older relatives to finish their tea, were very similar to Bellevue House, though the Anderson and Staye family homes were smaller and less opulent. The place did feel very familiar, not so much like a time capsule as a memory of my childhood.

A note written by John A. in the 1860s confirming an appointment.

Putting aside the career of its most famous resident (and Canadians don’t pay much attention to their past so that’s pretty easy to do), Bellevue House gives a great example of how people lived more than 150 years ago. It’s an interesting cultural snapshot.

So what of Macdonald’s is still in the house? There are some books in his study, and the cradle the family brought from Scotland in 1820, a cradle that Sir John A. used for his son, and that presumably he had used himself as an infant (he was born in 1815). That may not be much for fans of the man, but I found it sufficient. I doubt the family thought of keeping things for posterity, given that at the time there was no such thing as a country called Canada.

I’ve been in Kingston on many occasions, but for various reasons Bellevue House never made it on to my schedule. I’d go again. It’s a peaceful place and gives a nice insight into the era. It also has a very affordable admission fee. As someone who conforms to some of the Scottish stereotypes I appreciated that. I’m sure Sir John A. Macdonald would have too.