Would you kill someone to make your best friend happy? How important is that person to you? 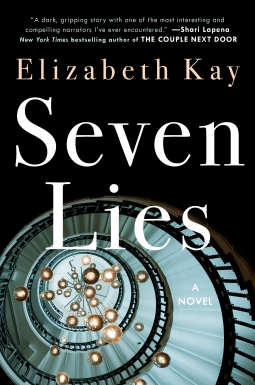 Honesty is, as we all know, the best policy. Once you start lying, it is tough to extricate yourself from the lie and its consequences. Usually one lie leads to another. And another.

Maybe Jane should have told Marnie the truth when asked her opinion of Marnie’s new boyfriend, Charles. If she had, their lives would be different. Or maybe not. Maybe the marriage, and what followed, was inevitable.

Elizabeth Kay’s new book Seven Lies hits the stores today, a mystery that will draw you in as certainly as one lie follows another. It is a fascinating look at love and friendship among people who are perhaps morally adrift. Certainly Jane is. Or maybe she is just a classic narcissist.

All I know is that she rubbed me the wrong way from the beginning. Maybe that is a male response – after all, Marnie loves her. Which I guess is why Charles put up with his wife’s best friend.

Jane would never be my friend. She seems shallow and self-centred. Loyal though – once you become her friend you are her friend for life. To a male she seems needy. She doesn’t seem to have a life. But then again, it is tough to be in her situation, even Charles can see that.

I didn’t like Jane, but I couldn’t put down Seven Lies. I wanted to know more. I wanted to know how her story turned out. The first lie was telling Marnie she liked Charles. What would the other six be? In some ways you could say I wanted to see if she would grow up.

Elizabeth Kay has created a narcissist central character who manages to convince herself it isn’t about her. She would be shocked if someone were to suggest that perhaps she wasn’t the centre of the universe. She can’t see how she really is; she sees herself as always giving, with nary a self-centred bone in her body. Don’t we all see ourselves that way? That’s part of what scares me. I dislike Jane immensely, but part of me is Jane

How do we define friendship? How does a friendship grow and change over the years? What is the difference between healthy and unhealthy relationships – and how do we know when we cross from one to the other? How do we deal with the consequences?

Seven Lies gripped me to its unsatisfying end. It isn’t that the book doesn’t end well, but rather that it didn’t end the way I wanted it to. My sense of justice was affronted.

Maybe I’m a moralist who likes tidy endings. Maybe I’m too hard on a character who could benefit from some professional help.

Thank you to Elizabeth Kay for crafting an entertaining tale. Even if I still want to scream at Jane to make her see reality.

← Life Is Like A Bowl Of Cherries
Are You Still Here? →