I have never traveled further south in the USA than New York City. Which is probably why I had never heard of Sean Dietrich, who blogs as “Sean of the South.” He’s a big deal down there. 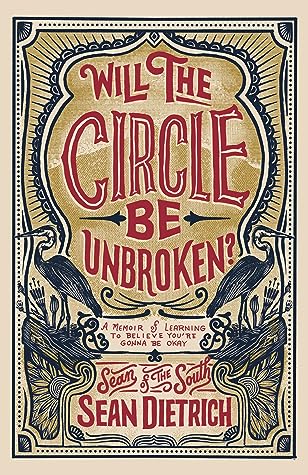 That means I didn’t know what to expect with Will The Circle Be Unbroken, which hits stores today. I made it a priority though when I read the back cover blurb, which summarized the life of a man who dropped out of school in seventh grade, right after his father’s suicide.

I’m not sure how that is even possible. I don’t think it is in Canada. Are there no truancy laws in the US?

Not starting, let alone finishing high school didn’t stop Sean from making a living as a construction worker and musician – but those jobs don’t appear to have brought more than temporary happiness.

I rarely describe a book as a “must read,” but if I did, this one fits into that category. It is delightfully funny, while at the same time being an insightful look at the relationship between parents and children.

The coffee can episode alone is probably worth the price of the book – I had my wife and her sister in stitches as I read out that particular anecdote. No, I’m not going to share it here.

This is a slice of life autobiography, a retelling of Sean’s attempts to come to terms with his abusive father’s suicide. At times it isn’t an easy read – there is lots of raw, honest emotion.

And lots of fried chicken, apparently a Baptist thing. Having grown up Baptist I recognized the stereotypes, but in my part of Canada I don’t remember fried chicken as a staple at church suppers. Must be more of a southern tradition.

How do you deal with a father’s suicide? How can you believe it is ever going to be okay, ever again? The voyage sometimes isn’t pretty as Sean Dietrich tries to answer these questions, sometimes not even knowing what he is asking.

Generational conflict goes back to Adam, so there isn’t much in Sean’s story that is new from a theological perspective. Yet every life and everyone’s experience of it is different, which made this a fresh read.

This autobiography has a few twists – that kept me interested. I can’t decide if Sean and I would be friends – I’m not sure about Southerners – but I’d be willing to take a chance. And maybe even read this one a second time.

← More From University Church
In The Mail →