The first question I thought when visiting the Dachau concentration camp was: “How could they not have known?”

Of course, many Germans did know of the concentration camps and bought the lies about what was happening there. It was easier to pretend than to confront the reality. 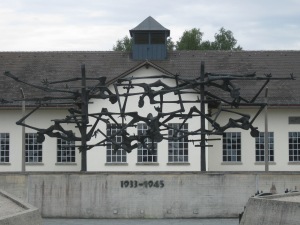 After all, as it said on the gates, Arbeit macht frei (work makes you free). The Reich needed workers. They wouldn’t be killing those taken to the camps and stuffing the bodies into crematoria. Except they were.

Dachau was the prototype for the Nazi death camps such as Auschwitz. More than 30,000 people died at Dauchau – and more than a million at Auschwitz.

Today the site is a memorial and tourist attraction, a stark reminder of just how low humanity can sink when it loses touch with God. It is a sobering place to visit.

I’d thought of doing a longer post, but the subject really doesn’t need more words – so much has been written since Dachau was liberated by Allied forces in 1945. Maybe in April on the anniversary of the liberation I will share a few more pictures.

When you visit Dachau, or one of the other Nazi concentration camps, the sheer immensity of the evil that was done there hits home. Never again? I hope so – but given human nature without God, I doubt it.