I’m left with unanswered questions. I can’t decide if that is a good thing.

Shawn Smucker’s latest novel, Light From Distant Stars, didn’t grip me at first. As I continued to read though, I came to realize there was so much more to the story than I first imagined. (Interestingly enough, I found Smucker’s The Day The Angels Fell, which I read two years ago, also had a slow start.) 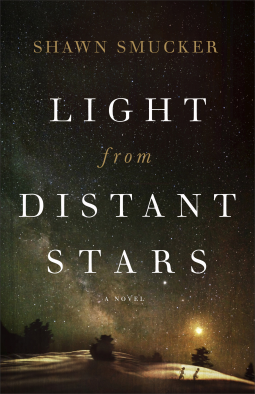 My first impression was that the book showed definite influences, from Stephen King, Frank Peretti and even a touch of Charles Williams. I was expecting a supernatural thriller/murder mystery. It was, and again, it wasn’t.

Cohen Marah knows he wasn’t the one who attacked his father and put him in a coma, with no chance of recovery. But do the police believe him? And where do those guilty feelings come from?

Ultimately Light From Distant Stars is an exploration of relationships, especially those between children and parents, which are rarely easy and always complicated.

There is no doubt my reaction to this book was colored by my circumstances. It felt weird to read about Cohen sitting in a fictional hospital at his dying father’s bedside, wrestling with their relationship, while I was sitting in another, very real hospital, at my dying mother’s bedside. The story hit a little too close to home.

What about the unanswered questions? A child is formed so much by her/his parents. It is not always a compliment to be told you are “just like your father/mother.” Cohen’s parents are misty figures at the start of the novel. We don’t really learn much about their motivations – though we do see their actions and their consequences. So many questions remain unanswered, though maybe that too is part of life. Who among us really knows their parents or how their relationship with each other works?

Light From Distant Stars was not what I expected. I was looking for light fare in trying times. I didn’t get it – but I’m very glad to have read it.