It is a beautifully told story – and one of the most disturbing books I have read in recent years. I am left to confront the question: why am I not like that? 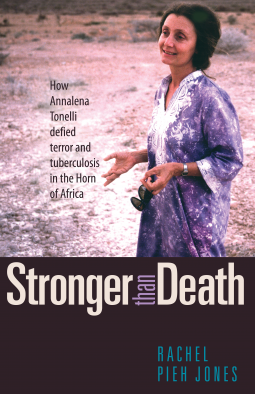 Stronger Than Death, by Rachel Pieh Jones details the life and work of a woman you probably have never heard of, someone who dedicated her life to the poorest of the poor. Annalena Tonelli was passionate about serving the Somali people in northern Kenya, Somaliland and Somalia, to become as they are. For decades she labored, not for reward or recognition, bringing health care and education in the face of incredible hardship.

There are adjectives that can be used to describe Annalena, all of which fail to capture all who she was: missionary, saint, servant, healer, educator and finally, martyr. All those are labels she would have rejected. Reading Stronger Than Death I am confronted by someone who never needed to ask the question: “what would Jesus do?” She just did it.

What drives a young Italian woman to leave a life of comfort to live in some of the most primitive conditions imaginable? Why does her connection to God, to living her Christian faith, seem so much deeper than mine? Part of me wants to be like Annalena, to live the Gospel. The rest of me is afraid of what that might mean. I like my comforts, I’ll admit that. She sacrificed so much for the poor, including her life. She was just one person, with nor formal organization, yet she made a deep and lasting impact in this hurting world.

Rachel Pieh Jones has brought Annalena to life in Stronger Than Death, with a story that inspires, challenges and gives pause for reflection. Annalena was not a saint, by her own admission. She was demanding, difficult to work with, unflinching in the face of conflict. She inspired those around her, spurring them on to greater love.

Much of Annalena’s story revolves around her fight against Tuberculosis, a disease that was ravaging nomadic Somalis. She wasn’t a doctor, but she could see the need and felt compelled to act. Adequate treatment required months; the nomads wouldn’t and couldn’t stay in one lace that long.

But they would for Annalena. She developed a new way of treating the disease, an approach based on relationship and love. Because of that, her patients were willing to stay the months necessary to complete the treatment. The layperson succeeded where medical experts had all failed miserably, because she loved the people she was treating.

Sometimes perhaps that love went too far. Or maybe not far enough. I struggled with Annalena’s apparent acceptance of Somali religious and cultural practices. For a Christian, Islam is a false religion. I can understand why, as a guest in a Muslim nation, Annalena would refrain from proselytizing, but her apparent promotion of the Islamic faith is something that makes no sense to me. However, aren’t we all walking contradictions?

Rachel Pieh Jones has painted a picture for the reader, transporting them to Annalena’s clinic with descriptions so rich you can see and smell the chaos and the hubbub. She takes us inside the mind of someone whose simple approach to the Gospel seems so hard to emulate.

Stronger Than Death is a challenge to all of us who call ourselves Christians, a call to re-examine what we are doing to be Jesus’ hands and feet to a hurting world. It sees so simple. Why do I find it so hard?

Stronger Than Death will be published October 1. Thanks to Plough Publishing for an advance copy of this work.

← Are You Afraid?
Confronting Climate Change →