There are some mysteries that may never be solved.

Where do crop circles come from? Is there really treasure on Oak Island? Are there still riches hidden in secret passageways in the pyramids? And why would American Christians vote en-masse for someone as un-Christian as Donald Trump? Why do they appear poised to do it again in 2020? 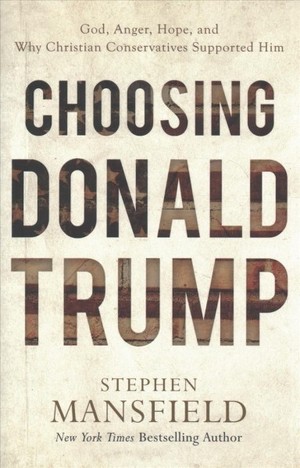 In the 2016 US presidential election it seemed that American Christians, at least those identifying as evangelicals, overwhelmingly supported the most un-Christian candidate in the nation’s history. It just didn’t make sense.

You could argue that evangelical leaders set their cause back by 50 years or more, despite putting their candidate in the White House. It certainly appeared to many that politics trumped (pun intended) faith – or that faith and Christian values were completely ignored in a rush for power.

Stephen Mansfield ‘s book Choosing Donald Trump is an attempt to explain how Christians came to support someone whose life reflected none of the values they espouse, whose track record should have put him at the bottom of the list of candidates they were willing to support, not at the top.

During the campaign I saw Donald Trump as a man without faith who managed to manipulate Christians into supporting him. Mansfield is much more charitable, laying out the roots of Trump’s Christianity and explaining his beliefs. I hadn’t seen that articulated before and hadn’t thought Trump was a churchgoer. Turns out he’s been attending somewhat regularly for most of his life. I still have difficulty with reconciling his behavior with what a Christian is supposed to be, but now at least I can see somewhat where he is coming from.

In the eyes of some Christian leaders, Donald Trump is a modern-day Cyrus the Great. Cyrus was a Persian king in the sixth century before Christ who, though not a believer, was used by God for his purposes. If you see Trump in that light, supporting him makes more sense: he may be un-Christian, but that doesn’t mean God can’t use him.

Much of Trump’s support from Christian leaders came from a promise to repeal the Johnson amendment, a particular piece of legislation I hadn’t heard of before. A simple explanation is that it stops the church from bring actively involved in politics. Who knew that was against US law? American preachers are always meddling, or so it seems to me. I’m not sure it would be a good thing for them to be even more partisan than they already are.

Rather than preachers endorsing candidates, I’d like to see churches speaking prophetically to culture. Politically active, but on issues not endorsing parties. What is a candidate’s stance on immigration? On the environment? On employment? How is that biblically informed? Does the church hold government accountable for its actions? Does it call for justice? There is a role for Christians in political life – and it should be so much more than just endorsing an imperfect candidate.

If you want to know how a twice-divorced admitted serial groper, who appears to be a greedy, liar with a racist streak, become the pick of the conservative Christian establishment, Choosing Donald Trump is the book to read.

(A review copy of this book was provided by Baker Books.)