Hero From Another Time

Been thinking a lot about family recently and its importance to us. Been doing a lot of family things too, sometimes full of joy, other times tinged with sadness. Those I will write about, but there is some internal processing to do first. So today a family story. If you think you may have heard it before, you did, back in 2014.

“In a Germany, where Hitler is the Lord God, we and our children have no place.” – Hanna Dahlkotter, 1934. 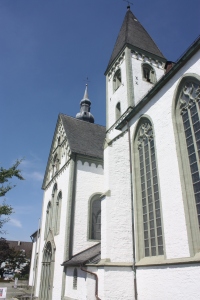 The Marienkirche in Lippstadt.

My wife’s maternal grandmother, Hanna Dahklkotter, died in 1967, thirteen years before Vivian and I met. I only know her from stories.

When we visited Lippstadt, Germany this summer Vivian’s Aunt Eva mentioned that she had been reading her mother’s diary, and specifically mentioned the week in 1939 when Hanna’s husband Paul had been held for questioning by the Gestapo. I don’t recall Eva mentioning, or maybe I missed it in translation, that she had taken some of those diary extracts, added some comments, and published a paper about the event. Eva doesn’t own a computer, so I was very surprised to stumble upon that account online.

I don’t speak or read German, so I ran the document through Google Translate. The results were imperfect, to put it mildly, but I got the idea. As frustrating as Google Translate can be, the flavour of what Hanna had written comes through. (I am not complaining. I think Google Translate is an excellent tool, but translation is more art than science and the software can only do so much – which is a lot better than nothing.) I think I’ve got the story straight.

On August 9, 1939, Hanna’s husband, Paul Friedrich Dahlkotter was taken for questioning by the Gestapo. As the pastor of the Marienkirche in Lippstadt he was part of what today is referred to as the “confessing church,” those who had not surrendered their Christian beliefs to serve National Socialism. He (among others) was taken to Dortmund to be questioned about a recent gathering of church leaders. The Nazis, as students of history are aware, were constantly on the lookout for any who might oppose them.

On August 10 Hanna took his Bible and hymn book to Dortmund for the Gestapo to give to him. The next day some medications for his heart condition. The following day messages from their three children.

She tried to keep life at home running as smoothly as possible, despite what must have been deep concern for her husband. She writes of how helpful the children were in the annual canning of peaches.

What shines through is her strong Christian faith, and the love and concern of the people for their pastor. Nightly meetings were held to pray for his release. There was a real sense that no matter what happened, God was in control.

A message from Paul, in prison, is recorded in the diary: “I know that you and the children do most faithful intercession for me. I’m fine, although my head is tormented by many thoughts. The Lord is with me daily, my soul tranquil and bright…God is my comfort and confidence, my hope.”

The graves of Hanna and Paul Dahlkotter in the Lippstadt cemerery.

Answers weren’t forthcoming in Dortmund, so Hanna decided to go to Berlin to challenge Gestapo authorities there on the continued detention of her husband. In her diary she records the questions she wanted to ask: Why was her husband arrested? What are the accusations against him and other pastors? She planned to explain to them why pastors needed to meet, the need to discuss church business, to proclaim the Word of God (especially to the youth) and to guard pure doctrine. She also was going to point out that those arrested were all men of honour who had demonstrated their patriotism in the past. Her husband Paul, for example, had been a soldier for four years until he was wounded during the Great War. As a pastor he had laboured for the soul of the people, without regard for his own health.

Was she afraid to confront the Gestapo? If so she didn’t record it.

Paul Dahlkotter was held for eight days. His release was as unexpected as his arrest. Or perhaps not – the power of prayer flows through Hanna’s words on the printed page.

Ordinary people can sometimes do extraordinary things. She was a pastor’s wife. They were the dreaded Gestapo. She believed in the power of prayer. She was not going to give up. I wish I had known her.