It has been 75 years since D-Day, and the generation that fought that battle is almost gone. This week though, we have been remembering a pivotal moment in world history with a series of posts I write five years ago.

The business end of a German PAK 40 anti-tank gun.

When we visited the Juno Beach Centre I came away with a feeling of not having heard the whole story. Don’t get me wrong – we thoroughly enjoyed the Centre and spent about six hours exploring it and the Beach. But I felt like something was missing.

The Memorial Museum of the Battle of Normandy, in Bayeux filled in the missing pieces.

The Juno Beach Centre in Courseulles-sur-Mer, where the Canadian troops stormed ashore on June 6, 1944, tells the Canadian D-Day story of the liberation of France. It includes a lot of social history, telling what was happening in Canadian society leading up to and during the war years. But I felt it didn’t give as much overview of the entire D-Day story as I would have liked. The Memorial Museum filled in the gaps.

When I was much younger I went through a World War Two phase. I read pretty much everything I could get my hands on. A lot of it I probably didn’t understand; I didn’t have the life experience as a pre-teen to grasp the motivations, but I could get a grip on the facts. So in many ways the museum was a refresher course, all the information was familiar to me.

Included is a collection of hardware from both sides: guns, tanks, uniforms – pretty much everything you would need to equip an army (though I don’t recall seeing any planes). There were uniforms and documents, maps and photos, all used to show the progression of the battle.

Somehow war seems to have lost its appeal to me. When I was a pre-teen I devoured every book I could get my hands on that told stories of the Second World War. I definitely romanticized it, being blissfully unaware of its realities and horror. To me the narrative was a simple one, good versus evil, with good triumphing in the end.

It wasn’t (and isn’t) that black and white in reality. The winners of any conflict are the ones who control the writing of the histories. There is no doubt that the Nazi regime was an evil one, that atrocities were committed in the name of the state. After the war many of those responsible were held to account for crimes against humanity.

However, I think it is safe to say that if the Allies had lost the war, if the Axis had been triumphant, then there would still have been war crimes trials. Allied leaders would have been called to account for the firebombing of Dresden and the atomic bombing of Hiroshima and Nagasaki. Yes, I know, the best guess was that dropping those atomic bombs saved a million soldiers’ lives. We’ll never be completely sure of that though. 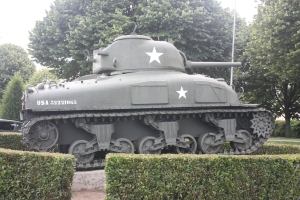 Today wars seem a lot less black and white. There is confusion as to who the good guys are. Sometimes today’s bad guys become tomorrow’s good guys as policies and priorities shift. It doesn’t seem that swords are going to all be beaten into ploughshares anytime soon.

The Memorial Museum of the Battle of Normandy brings us back to 1944 very effectively. I think any visit to those D-Day beaches should include it.