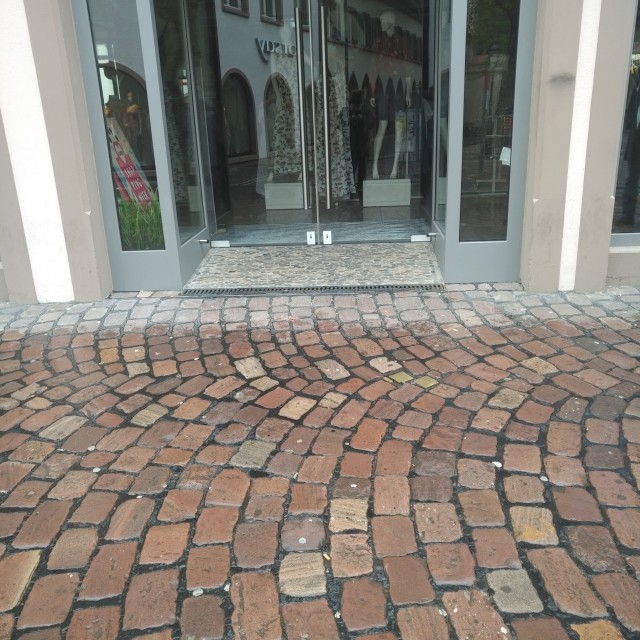 If you look closely, you can see two metal plaques placed among the cobblestones, memorials to two people who used to live at this location.

They are a common sight in German cities. So common they are easy to ignore.

The weather was a little frosty Sunday, but that didn’t stop us taking a walk through the old section of Freiburg. It is an historic section of the city, with many buildings proudly displaying dates from five centuries ago.

I noticed these stolpersteine (stumbling stones) in the cobblestones as we walked. Not sure why I stopped; I think maybe the others had gone for coffee or ice cream at that point. 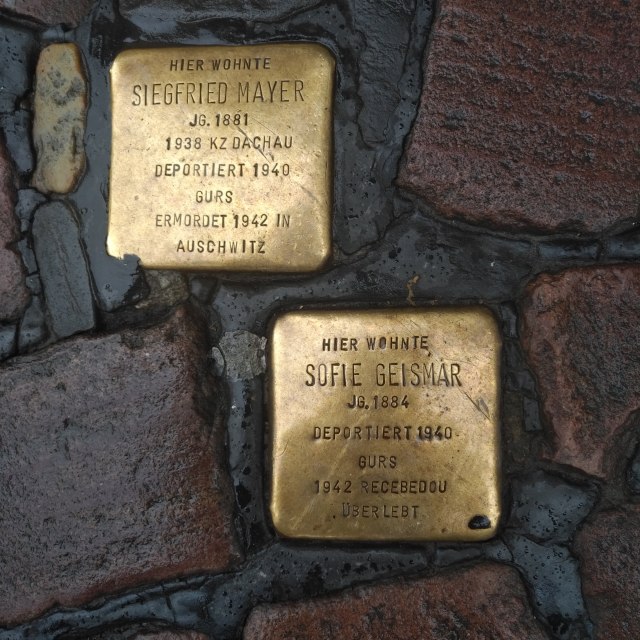 Germany is still coming to terms with its racist past, with the legacy of national socialism. These pavement markers don’t right any wrongs, but they are an acknowledgement that wrong was indeed done.

I wonder how those born today, so far removed from the Nazi era see these remembrances. Will they understand the enormity of those crimes? Or is it so far in the past as to seem somewhat unreal. We know the history, but accepting the reality seems somewhat different.

There was a couple in the church I was married in who came to Canada from Germany after the Second World War. I didn’t really know them other than to say hello, so I never asked them about the numbers tattooed on their arms. I knew what they meant though. They were among the few who survived the concentration camps.

That generation is almost gone though. Most people today have never spoken to someone who survived the Holocaust. Soon those voices will be silenced forever. And then what?

How does a society handle it’s unpleasant past? How do we acknowledge the sins of our fathers, and at the same time move on, vowing to not repeat this mistakes? What if the sins are so enormous that society would rather pretend they never took place?

Germans seem to have done a good job remembering the horror that was the Holocaust. There are small reminders, like these stones, wherever you go. It was a bleak period in their history, one most people would probably prefer to put behind them. But there is a danger in that, a danger of history repeating itself. Human nature hasn’t changed much in the past century. If we think it has, we are delusional.

It is up to all of us to keep the memory alive, to understand that when individuals or a nation abandon a relationship with God, bad things can happen. Very bad things.

These stumbling stones are there to help us remember, to help us learn. That is something we should be trying to do. For our future and our children’s future.