… the snow globe was invented in Vienna?  Neither did I, until I saw this sign on a snow globe display at one of the many Christmas markets on now in the Austrian capital. 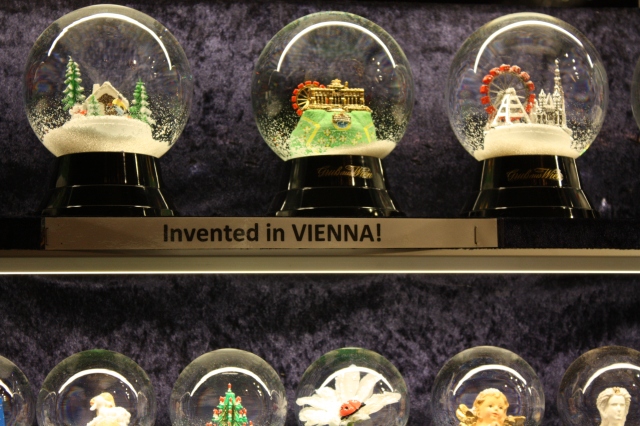 I’m not sure the display sign should be considered accurate either. I looked it up in Wikipedia, and I think it might be more accurate to say the snow globe was first patented by someone from Vienna.

I was looking for a souvenir of the trip, but a snow globe wasn’t on the possibilities list. I already own one snow globe, and it has seen better days, as you can see here.

I don’t know if all snow globes eventually have a water problem. The one I own was inexpensive. Actually, it was cheap. Maybe the more expensive ones are sealed well enough that they never lose their water – but do I want to pay to find out? I don’t think so.

In the end I wound up not really making a decision on souvenirs. My wife chose a couple of magnets for the fridge, and that is good enough for me. Just a little something to jog the memory.

Once I go through the photos I took on the trip I will share some of them with you. I think I got some good ones, though my camera was malfunctioning for part of the trip. Until then, snow globes are the order of the day.

← Hochberg IV
Relics of Another Age →