What Are We Afraid Of?

The grave of Sara Wrench in St. Edmund’s churchyard.

I’m feeling indecisive this morning; can’t decide what today’s post should be. So I’ve decided to share this one again, originally posted in November 2014.

I have mentioned that it is my custom to attend church on Sunday wherever I may find myself, which explains why I was at St. Edmund’s Church in the British village of East Mersea on a July evening for evensong. We had skipped going in the morning service as our hosts wanted us to see Dunwich.

After the service I was taken to the graveyard behind the church to see one of the graves. I was glad I had kept my phone with me so I could snap a picture (I was in church to worship, not to be a tourist, so I had left the camera at the house).

I had never seen anything like it, and the story I was told about the grave sounded like something from the Middle Ages, not the 19th century and certainly not the 21st century.

The grave belonged to a 15-year-old girl, Sarah Wrench, who died in 1848. Surrounding the gravesite was an iron cage. I was told the villagers thought the young woman had an “evil spirit” and they wanted to make sure she stayed buried. They thought she was a witch. 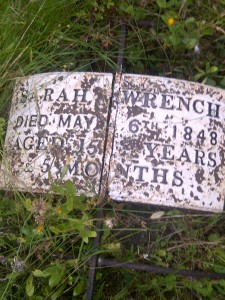 That sounded more like it was from Dracula, or some other vampire tale than something to be found in the rural English countryside. My host didn’t provide details or give an opinion on what he thought; he just recounted what he had been told.

My first impulse is to discount the story as superstition, but… I know evil exists, even if it is not fashionable to believe that. Anyone who has lived in West Africa (as I have) knows there are things that cannot be written off as mere superstition, a spiritual realm that we westerners scoff at but is real nonetheless.

I was curious enough though to want a second opinion, so I Googled the young girl’s name. Wikipediatells a slightly different story. The cage was referred to as a mort-safe and was supposed to thwart grave robbers. That sounds plausible too; the Wikipedia entry does mention the bit about evil spirits but seems to discount it.

I have to think though that the locals might know more than an anonymous wiki poster. Why only one grave in the cemetery protected in that way against theft? You would think in all those years someone else must have been buried with something worth stealing.

Both versions of why the cage is there speak to our fears, fears of death, the unknown and evil, although I don’t know anyone who has a fear of grave-robbers.

We live in a world where fear is the norm. Parents don’t let their children roam free like I was allowed to in the 1950s and 1960s. What if there is a predator out there? We have to keep our children safe! (I’m sure there were predators back then too, just not the same media coverage.) Those protected schoolchildren advance from grade to grade in school, whether they master the work or not, because we are afraid of failure, of hurting their self-esteem.

As a society we are afraid, of terrorists in our midst (and beyond), of environmental degradation and climate change, of Ebola or SARS or AIDS or any one of a million other possible diseases. Our sun could unexpectedly go nova; or our houses could be destroyed by fire on an earthquake. There is always some new fear, some reason to be concerned as the four horsemen prepare to saddle up.

I think being a Christian helps keep those fears in perspective. I understand that, but the alarmists would be better off if they could add a small dose of reality to their fears. Yes, there is evil out there – but the odds are pretty good you are not the target. This time anyway.